Humans have made their mark. How much, how bad will it get and how irreversible is it?

It’s a bummer this has to be categorized under “Political” but that’s our reality.

Evidence is clear that our planet is warming. It’s also pretty clear that humans are playing at least a part. The most reliable sources we have show that the Earth’s average temperature has been cycling for millennia. An interesting article in Wikipedia explains how we know that warming, cooling, warming, etc., with bouts of dramatic changes, result from many factors, including us.

Cycles This chart shows global temperature fluctuations over the past millennia. It’s just another way to view the past and impending trends.

The “Cycles” illustration above is one way to visualize global temperatures. The average line is a bit of a misnomer since many scientists feel that Earth spent a long time chilling in a deep freeze where even equatorial areas would be snow covered.

Human influence won’t likely affect the direction of temperature change but it will influence the rate of change along with its peak. 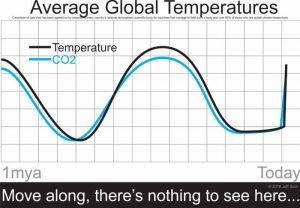 A large volcanic eruption, for example, can block light and lower the temperature far more than all human influence to date. Same with a meteor. It depends on a lot of things since some factors work to cool and others work to warm. We all probably know the term “Nuclear Winter.” It refers to the theory that, in a cataclysmic nuclear attack, atmospheric dust would drop global temperatures dramatically.

We should still act responsibly and limit the rate of change as much as we can but must be realistic about what’s coming, even without human intervention. That’s been the way of our planet for a long, long time. Our limited life spans make it seem cataclysmic, and indeed it could eventually be, but they’ll be more local than global in scope. Humanity has gotten to the point where it would probably survive such changes albeit with great tribulation.

There’s a huge brouhaha among some who don’t believe that human-influenced global warming is even happening in spite of having every national science body accepting the evidence that shows it is. A problem is the subject’s extreme complexity. Pieces of evidence—lots of it—can be found that counter warming, showing that parts of the earth, or periods of time, experience cooling. Scientists have to account for all of it and, in amalgamation, they overwhelmingly find that the many interacting factors add up to warming.

They don’t want to believe it, for a variety of reasons, and coalesce around a minority of scientists, frequently who are not climate scientists, who publish information saying that warming doesn’t happen. You can find supporting evidence for anything you want. Want to believe that jet contrails are really government administered agents? Yup, there are websites and “experts” for that.

So it comes down to who you trust. 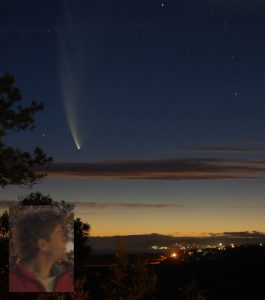 Consensus is a powerful tool in science. There are those that love to denigrate an agreement of experts and will sometimes cite failures. There are failures, to be sure, but the vast majority of science is accepted because it represents consensus! We don’t doubt germ theory because the evidence has mounted and researchers worldwide have settled on the science. Consensus has been wrong, for sure, but evidence always comes around to show where the truth lies.

It may be fashionable to pooh-pooh consensus but it is, in fact, how we trust nearly everything we know in science. It’s not static, either, as new research comes out, gets verified, repeated, studied and documented, consensus changes. That is a big part of how science works.

An important point to remember is that science, including climate science is about probabilities, not certainties. So even though the scientists agree on what’s happening, they ascribe it a probability—a very high one, to be sure, but a probability no less.

As to the politics, that’s a whole other matter. What do we do? That depends on a huge number of factors. Human influence may, in fact, be quite small. Would it then be fair to charge “rich” nations, expecting them to pay exorbitant fees? Even if the effect is large, our reality is that no nation will vote itself into insolvency. I’m afraid that’s just the result. For one thing, that’s not likely to happen. We’re not, nor should we, vote ourselves into poverty because of effects that are not certain.

There are places on earth that will become uninhabible. They will anyway in a process of sea level changes that have going on for millions of years before humans first stood up 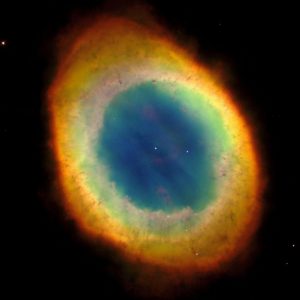 Stars larger than the sun will end like this—in a brilliant supernova explosion. Our sun’s death will start by first growing much larger, frying the earth, then going out with a whimper. It will begin cooling as a white dwarf star until the end of time. There won’t even be a black hole to intrigue distant observers—it doesn’t have enough mass for that.

The end is certainly coming, just not from global warming. The earth will be fine but some places on it won’t be so hospitable. Miami will, for example, eventually become submerged and there’s no amount of emissions reduction that will change it. The ocean level will rise over the next 100,000 years as it has many times in our past. We may slow down the process, and we should, but we aren’t going to stop it.

Large meteors will hit the Earth and extinctions are likely as they have been before. But the greatest certainty is that our sun will exhaust its fuel and, in the process, engulf Earth in a searing expansion. The remnants of life will disappear long before the 10,000 degree finale. That’s global warming!

We as a species must eventually get along well enough to step off this solar system lest we become the crispy leftovers in a celestial oven. Don’t worry, though, you’ve got a few billion years to prepare.