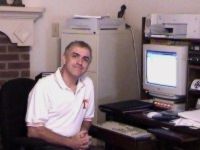 Robin Rumbolt is an electronics engineer and paramotor pilot. He offers this information up to a sport that struggles to communicate effectively while airborne.

First of all, I have to admit to you that I am an ICOM junkie. I own six of their radios, five handheldï¿½s and one base radio. So I felt pretty good about reviewing their latest aviation hand held radio, the IC-A6. I own the predecessor to it, the IC-A5/A23. I love that radio. I was prepared to be pleased.

Southernskies.net offers a Fresh Breeze version of the Icaro helmet that includes an amplifier AND plugs compatible with the Icom A4,A6, & A24 aviation radios AND many dual prong plug FRS radios.

A small switch on the earcup selects the type of radio interface. If you use both aviation radios and FRS radios, this is the radio helmet to have! ï¿½

2007-09-24 The Fresh Breeze Icaro helmet WILL NOT work with the Icom IC-A5/A23 which a lot of PPG pilots apparently have.

The plugs do not fit. Even with an adapter it doesn’t workï¿½there no transmit
audio. Robin says it’s likely due to the difference in microphone impedances.
The IC-A23 has a 150 ohm mic input impedance which severely loads the little
amplifier in the helmet. The IC-A6 works fine because it has a high
impedance mic input impedance of over 100,000 ohms.

The radio looks good. It felt good and solid in my hand – substantial, not a cheap plastic toy. I liked the deeply fluted knobs that are easy to turn even if your fingers are slick with oil or sunscreen lotion. The LCD display is large, which is really good for this 58 yr old who is in denial about the need for wearing bi-focals. Unfortunately, the buttons and the printing on them are still small. The push-to-talk button is a solid piece with a definite snap when you press it. Backlight of the display and keyboard is accomplished by a small button next to the PTT button. There are two knobs on the top of the radio, one for volume and one for increasing or decreasing frequency, memory channels, or other function values. The external headset jack is of the dual prong variety. The antenna connection is via BNC connector.

The first thing I do when I get a new radio is turn it on. Yes, I realize that batteries do not come charged. But usually they have enough juice to come on, even if only briefly. I installed the supplied NiMH battery on the back of the radio and I pressed and held the PWR button until the radio beeped, and then did not come on. OK, the second thing I did was to charge the battery overnight!

The next day I again pressed and held the PWR button until the radio beeped, and then nothing happened. Hmmmï¿½. This was not a good sign. I was forced to read the manual. I learned that to turn it on, one had to press and hold the PWR button for several seconds until the radio beeped THREE times! Why three times? This radio had just failed my ï¿½Out-of-the-Boxï¿½ test.

This radio has everything you need without all the ï¿½cutesyï¿½ features that are sometimes included, but you donï¿½t ever use.

The radio has direct frequency entry OR you can select from 200 user programmable memory channels arranged in 10 banks of 20 channels each. Each memory channel can be programmed with a 6 character alphanumeric name. Names are entered the same way as a text message is created on a cell phone. Itï¿½s a bit of a pain since the letters arenï¿½t printed on the buttons like on a cell phone. You HAVE to look in the manual, but you donï¿½t have to do it very often. When you flip through channels, you can see the alphanumeric names OR the frequency readout. It is easy to switch back and forth between the two.

Radio ï¿½cloningï¿½ can be easily done without a PC by using the optional OPC-474 cloning cable. Memory channels can also be read and programmed via a serial port (OPC-478) cable or USB port (OPC-478U) cable and a computer running the CS-A24 Cloning software. This makes it really handy to add, rearrange, and delete memory entries. I did not have these for this review, but I DO have them for my older IC-A23. They make memory modification quite easy.

One new feature I liked and used much was the ability to scroll through the last ten frequencies entered via two left and right scroll buttons. Your most used frequencies are there and just a few clicks away.

All ten NOAA weather radio frequencies can be tuned by the A6. The frequency last tuned will be called up anytime the weather radio function is selected.

The radio also has a Weather Alert function. When it is ON, the radio will alert you if the weather bureau issues an alert. I guess it works. No alerts were issued while I was reviewing the radio. I found the alert operation to be a bit annoying. To sample the weather alert frequency, the radio has to briefly leave the channel being monitored. This means that every few seconds there is a dropout of the audio of the channel being monitored. It was annoying enough for me to keep the Weather Alert function OFF.

There is only one other feature on the radio ï¿½ the 121.5 emergency button. This RED keyboard button will set the radio to the 121.5 Mhz frequency if the button is pushed and held for several seconds. I guess Icom just had an extra button space to fill. I canï¿½t see that this button would be used very often.

I found that squelch sensitivity varied depending upon whether the radio is being held or sitting on a table. This made setting the squelch a bit touchy at times.

The user manual with complete specifications can be downloaded from
IcomAmerica.com. In case that link goes bad, it is also available here.

The A6 external headset connector is made for dual plug prongs that are both 3 conductor. A cable was included to adapt it for standard aviation plugs. PPG helmets with two prong plugs cannot plug in here as the radio uses separate microphone and PTT inputs. If tried, the transmitter will be locked ON. Also, a higher microphone audio level is needed than the standard PPG helmet can supply. I measured that the A6 needed 275 millivolts of microphone audio for 100% modulation. A PPG helmet puts out about 25 millivolts. An adapter/amplifier would be needed for use with a PPG radio helmet.

As I expected, this is a good, basic, aviation radio. Standard and needed functions are all included without the radio being cluttered with a lot of extraneous ï¿½cutesyï¿½ functions.

Unfortunately, standard PPG radio helmets cannot be connected directly with the A6 due to the different connector and audio requirements. An adapter and amplifier are needed.

I like the radio, but am disappointed about its inability to easily interface with a PPG helmet.