Impromptu PPG at Frans on 17

A text message came in from Dr. Dave: “PPG at Frans on 17, dinner to follow”.

And as it happened this was a Saturday that both Tim & I were off on. Orders were caught up (envelopes readied for Monday shipment) and the weather looked perfect. Why not. Plus, the Enterprise is heading out shortly for its winter retreat and this would give us a chance to make sure everything was copasetic. 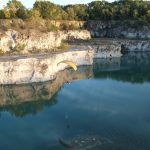 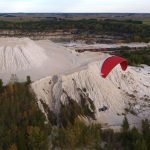 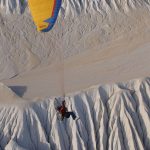 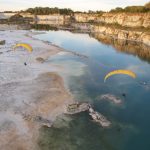 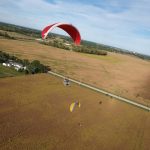 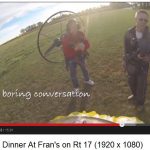 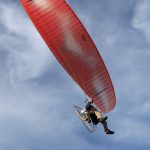 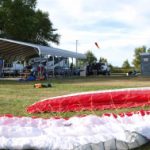 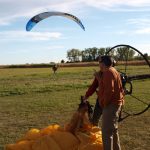 Fran’s on 17 is a small restaurant/bar that tolerates us flying there in exchange for throwing some business at them. Food was great and service was…interesting. Think Ed Debevics. We had a great time.

But man the flying was spectacular! There’s a quarry down there only a mile or less away that offers weirdly gorgeous views, especially in the low evening sun we soaked in. Quite a turn-out of pilots showed up from all over the Chicago area. Who’da thunk it.

Lance Marczak was there with his own motor. In fact, I don’t think he worked on a single machine as best I can tell. Although he did offer to help Dr. Dave with a broken pull-start chord. Dave’s motor took several pull to start but, thankfully, it did start since the rope broke on that pull. He knew it would be a long flight.

We flew for a while, took a break then went up for round two, putting the sun down on a gorgeous evening.

Met a guy who is learning to PPG who has his own Citation Jet. Now that’s a nice ride! Having your own jet is cool but having your own paved runway to fly it from? Off the charts. Amazingly, I’ve never even flown in a business jet. He uses it for business so it’s not the sort of thing we’ll likely go buzzing around the pasture in, especially burning close to 100 gallons per hour (down low).

Tried a different wing. Gin something or other and it was quite efficient. Fairly typical soaring type ride that inflates easy and is at home doing double duty, soaring or motoring.

Sam Balcius was out filming so I gave him something to film by stepping ever so gingerly on Lance’s wing. Only once, only briefly.

We all did a lot of corn flying where an engine failure would have been cornucopia of retrieval headaches. But it’s the over-water stuff that really raised the risk bar. I worked hard at staying within glide of shore but there a few moments where it would have been most unpleasant. Bones would have been unhappy to say the least.

Tim was able to join me which was nice. We hope to head out for ABQ in a couple weeks so this was a nice chance to be sure everything is working.

Thanks to Fran’s for letting us fly there. Even if you’re not ppg’ing it’s a great little restaurant.

What a great little flight break! Maybe not a flash mob but a fun little impromptu gathering of ppger’s.