This was Pyro’s Paradise with a side of PPG. More on that later.

When I arrived Brandon gave me the brief “our rules are simple, buzz the horses, especially skittish looking ones, fly low over the houses at full power, do footdrags down the runway while people are trying to launch and don’t waste energy looking around for traffic.” Best briefing I’ve ever had!

Airport owner Larry Beckly and his partner Tom offers up an awesome field and makes everyone feel welcome. It’s primarily a PPG event but exceptions are made for other craft with permission and an individual briefing. I flew my Bonanza down and they were most accommodating. My arrival plan did change when I noticed a number of PPG’s up already in the afternoon air. I circled at pattern altitude until the kiting paragliders cleared off and the flying folks spread out.

A beautiful grass runway is kept like golf greens. They mow this thing essentially every 4 days. Boy are we lucky. Since it was so dry this year people were able to camp all the way down the runway.

The Indy Air Hogs dooooo know how to party. 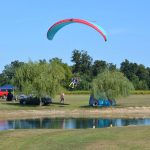 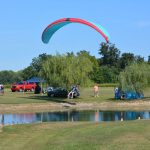 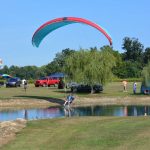 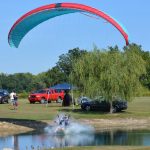 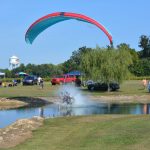 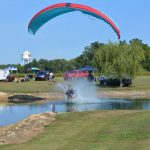 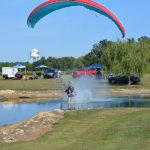 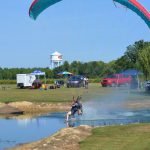 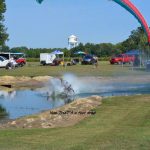 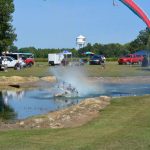 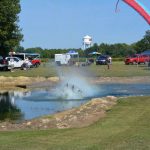 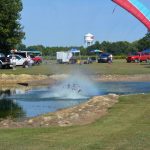 Paul Anthem takes his role seriously, and I *DO* mean seriously! For one thing, what he pulls off requires high end flying skills. A high risk tolerance and willingness to sacrifice a bit of equipment help out. I’m not gonna spill the beans about his latest endeavor but lets just say the moron plunged to new depths in a teaching moment. The water footdrag has never been done with so much…well…you’ll just have to watch the next episode.

It will be up on Paul’s channel hopefully soon and it will be absolutely hilarious. The flying piece is even more impressive when you realize how small the pond was and that “the maneuver” was done downwind. Nuff said.

Brandon is a paramotor pilot who skydives which he did a few times here. I had mentioned wanting to film his exit from the PPC so we put it together. Up at 4000 feet the PPC shut off his motor and stayed in a shallow left turn so I could keep up while Brandon crawled out on the side. The imbalance caused a steeper left turn but he let go pretty quick and dropped away. What a cool shot that was! He stayed on his back during the initial fall, filming the PPC as he dropped away. Both shots look great.

Then I followed and filmed the gliding PPC around a bit, shivering, until we reached civilized air temperatures down low. Have I mentioned how much I hate the cold? Thanks to Dave Halcomb for letting me use his oh-so-sweet running Miniplane.

I didn’t try anything new but did fly a couple Air Conception units. I’ve reviewed these before and like the machine. Some quick observations. It’s extremely light weight, comfortable, very powerful with the Moster engine, has somewhat higher vibration and loudness than others with slightly more torque effect than others but within an easy handling range. Overall it’s a very nice unit that anybody can love because of it’s high power.

I found the harness comfortable although on the ground it feels like the leg straps are restrictive, hanging too low on your thigh. But it winds up being no problem during launch. I’ve had this with other machines whose leg straps that hang down low like the Parajet Volution. I’d notice it while walking around but then had no issue launching, even before the wing lifted the motor.

As far as the torque issues, realize that my scrawny 136 pounds feels twist more than most. Average humans will find it very manageable.

Lightweight rocks, too. There are launches that you won’t make with heavier units, namely where the wing is feeling a slight tailwind. Yes, I realize you don’t launch in a tailwind, but there are times when you don’t even know it’s a very slight tailwind up where the wing is. And when it happens, usually in what feels like calm air, heavy weight keeps you from accelerating since the wing can’t get enough lift. I had that happen in Cleveland where we necessarily were launching with a tailwind and I just couldn’t manage the weight of a heavier motor without the wing’s lift.

What a generous group. Quite a few of the Indy Air Hogs gave up big parts of their day to make it more enjoyable for others. Matt and his wife cooked up a storm to great benefit of our waistlines. And the fireworks. I just saw the build-up of what went into it and a few pictures but wow, that was an enormous effort. Peter Sage organized it but had help from quite a few others. The city of Scottsburg paid for quite a bit of it and man did they get their money’s worth.

It was fun meeting people again who I either only know from Facebook or fly-ins. I swear the most interesting people are those that are passionate about something.

Thanks to all who made it possible, I really enjoyed myself!