Is the Earth Flat?

Well, it LOOKS flat. So how do we know it’s not?

I know two people who really the earth is flat, so I was curious. Is there a way we could answer the question directly, using understandable logic and measurements possible with the naked eye and a protractor.

I was especially intrigued when I found out that a fellow paramotor pilot believes this. Would he be willing to look at it critically?

This is how I approached it. For more on being a critical thinker go here. 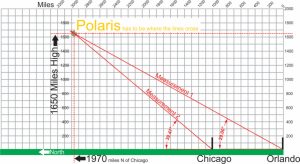 If we know two angles to an object on a flat plane we can know where the object is over the plane. When did this with one flat earth believer, he got one of the “leaders” involved who wrote this off to “atmospheric disturbance” even though it can be repeated with exact results. The same results, every time, on any night. It goes to show, they’re not about understanding, they’re about belief.

Go out at night and look at Polaris, the North Star.

1. What angle above the horizon must you look to see it? That’s elevation.

2. What the angle relative to True North (aka True bearing)? In the U.S. magnetic North is pretty close to true North but there’s more error as you get west or east of Chicago. Google “magnetic declination” for more on that.

Here is what we would find by taking these measurements. In Chicago, it’ll be about 40 degrees above the horizon (elevation) and in orlando it’ll be about 30. Both bearings would be True North.

Above is the illustration I used to determine how far away Polaris would be on a flat earth. If the bearing (left/right) lines never overlap that would be problem in a planar model but we’ll ignore that for now.

Doing it this way avoids using Trig which is merely a quantification of angular and distance relationships anyway. You can use graph paper. Look at the North Star (Polaris). Every night on a clear sky you can see that it doesn’t move in the sky. All the stars go around it. It turns out we can learn a lot more.

Why It’s Ridiculous to Believe in a Flat Earth NOW

To think the world is flat now, with everything we know, with everything we use day to day, is completely absurd. *I* would have to be part of an absurd conspiracy. I’ve written navigation software back in the day that uses great circle calculations for a sphere. Besides how easy it is to prove using the technique above, there are many others. But beyond that consider how many people would have to be in onan IMMENSE conspiracy involving hundreds of millions of cohorts.

Flat earthers have to not believe that we don’t have anything orbiting earth–an extraordinary belief! Especially given that we can use consumer telescopes to see satellites or the ISS. They have to believe the ISS is somehow faked. And every single spacefaring country (now about 40) are in on the conspiracy. Here are some other ways to realize that yes, Earth must be a sphere.

Other Ways to Know

There are many other ways to know. Reliable ways. Ignoring them, or letting a belief’s “tribal leaders” as I call them, dictate how to interpret observations is how the belief perpetuates. Bad or misunderstood science is promulgated. After I offered this explanation a flat earth “expert” was called in and brushed off these observations as “atmospheric distortions” at which point I gave up. Distortions would have to happen the exact same amount EVERY DAY all year. That’s ridiculous, of course, and shows that this is a belief not an understanding.

Google “how we know the earth is round” for more but here is a great resource.

This belief is the most depressing expose on the state of humanity’s ability to progress. That we must expend energy on such easily provable facts means that progress will be slowed. Other areas that rely on experts making esoteric measurements not easily understood will be that much harder. I fear whether people like this will believe it when NASA or another space agency discovers a meteor heading for earth.

See another angle on JeffGoin.com.