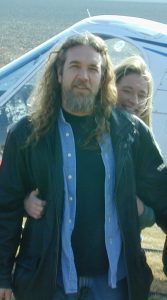 Tim and Corrie before helicopter flight

Jim Filgut is one of those humans you can’t help but liking. He’s the kind of friend you want.

Sometime before 2005, a friend of Jim’s, Timmy, was diagnosed with terminal and untreatable cancer. He had a few months of life left and always wanted to fly. Jim wanted to help in some way, at least to get some paramotor pilots to fly by but, being winter, the weather wasn’t working. Maybe in a few months but that might be too late. Tim couldn’t always get around very well but could walk most days and certainly could make it to his back yard.

Jim said it best on a newsgroup after the fact, a post that is included below. The Paradrome video he refers to was made by John DeFranco of a fly-in we had at Nick Scholte’s place.

My 45 year old friend, Timmy, has terminal/untreatable cancer. I went to visit him several weeks ago and brought the incredible Paradrome video to entertain him. He had never seen or heard of PPG before and was thrilled with the video and thought that it was about the coolest thing he’d ever seen. He had a million questions about flying! (Excellent job John & John!) I chatted with Jeff G, Gary Brown, Mikey and Alex about this and they all offered to do fly-by’s around his house which is only about 2.5 miles from Harryport.

Unfortunately, Timmy may not last until the weather is more suitable for PPG flying. Gary offered a Cessna ride but Timmy would have to get to the airport. Jeff G, in his usual much more than generous nature, offered a helicopter ride in Ellie! After talking to Tim’s wife, we arranged the surprise ride. I went to Jeff’s house and we flew to Timmy’s backyard and landed. Tim’s wife had pre-arranged to have about 10 people there to witness the event. He had no idea why all of these people were showing up at his house at the same time. They all had different excuses for being there. They all came outside at the sound of a helicopter circling the house. There were ear-to-ear smiles on everyone when we landed right behind his house!

After everyone, mostly long time Harley bikers – hence mechanically inclined, examined every single part on the helicopter, Jeff and Timmy took off for his ride. While they were flying, I asked his brother “How’s Timmy doing?”. His reply was, “I don’t know about before but I’m sure he’s got a giant smile on his face right now!”.

When I saw Timmy a couple days later, he said he’d trade both his Harleys for a “chopper” like that!
As I’ve said before, some of the kindest and most generous people that I’ve ever met have been through PPG and I thought that I’d share just another example of this kindness with the group.

I’ve posted a pic of Timmy and his wife Corrie (along with a snapshot of the helicopter ride) on the IPPGA site. Best wishes to all of you and, of course, THANKS AGAIN TO JEFF G. AND
THE REST OF YOU!!!
Jim Filgut

Timmy indeed passed away several months later, leaving behind a loving wife and many, many friends. The event couldn’t help but inspire introspection. Even knowing his time would soon be up he continued having a positive influence on those around him. What will we leave behind? The adoration and respect of others like Timmy? After seeing him in action it’s obvious I’ve got a lot to learn.

Thanks Tim for the experience. 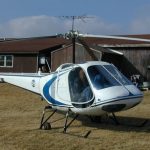 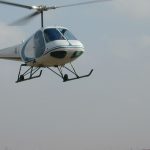 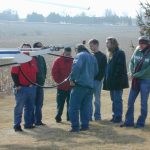 1) Just before firing up.

2) On approach. During the flight Timmy was a consummate gentleman. In that brief time I found him to be thankful for the life given rather than despairing over what life may be lost.

3) A group of Timmy’s friends gathered around while we talk about the helicopter.