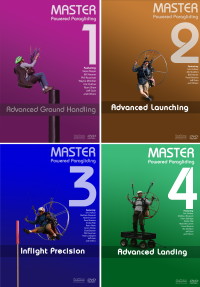 Wow, I can’t believe its done.

Although still in the midst of order fury (thanks!), I’ve had time to contemplate, having some surprising thoughts–namely how I’ll miss it. I’ll miss the directed flying, working with the pilots who have been so much fun, squeezing clarity out of confusing topics and going out with a mission. I’ll move on to other projects, of course, and will enjoy them a different way, but nothing that addresses technique so intricately. It has been extremely rewarding.

Master PPG was the realization of a desire to share what I’ve learned through experience, travels, and spending time with so many amazing pilots. A realization to put into practice what I’d learned, mostly from Phil Russman, about making quality videos, and to make it readily accessible.

It was fun to see pilots do impressive things and put together methods to learn them. What I’ve found surprisingly fulfilling is how to deconstruct an action in comprehendible ways, then show how it can be learned. After all, this stuff is physical and requires rehearsal to actually gain the skill. You can learn the specific relationships in a video or book, but they must make it into your reactionary brain with practice.

Once the rush is over I’ll have more time to work on my next project, “Airspace For Ultralights” which has already mostly come together in script form. It’s rewarding in a far different way and involves even more graphics and animations since it’s so much a 3D concept. It’s easier in another way, though, because I’m not showing specific flight techniques but rather visual concepts. Properly wielded, motion is a powerful weapon in the war on confusion.