My Risk is OK, but THAT’S Stupid 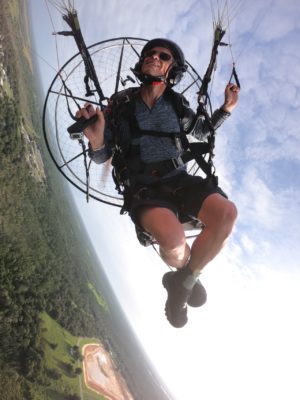 Jeff Goin on a brief excursion through 90 degrees.

Paramotor pilots talk about doing barrel rolls at low altitude as being stupid.

Airplane pilots talk about how strapping a spinning prop to your back with 2 gallons of gasoline below a hot exhaust is nuts.

You get the idea.

Barrel rolls at low altitude are riskier. Even more at low altitude, and much, much more for pilots who haven’t mastered energy management. Most people recognize that trying to go upside down on an aircraft held together with strings carries some peculiar risk.

Nope, things aren’t as they seem: we’ve learned—through pilot deaths—that there’s a lot more to it.

As an aside, it’s the type of knowledge like about spiral dives that motivates me so much. Those who charge into paramotors with minimal education rely on luck. Thankfully most of them get out because of frustration from the struggle of trying to launch.

If new entrants would avail themselves to the knowledge we’ve already gleaned they could at least make informed decisions. Besides spirals, they would know about water’s lethality, rotor,  winds, weather gotchas, and other dangerous corners. People who get into the sport and skip becoming educated will be ignorant of the darkest corners. Like blackout during spirals. At least they usually never know it since, when the maneuver goes bad, it’s the pilot’s family and friends that have to deal with the death.