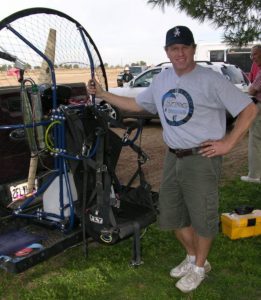 This is a compendium of comments on various paramotor kits that I’m familiar with and usually have flown (as described in the Flight Experience). Remember that a lot of preference comes down to personal taste and all comments come through with some unavoidable bias in that regard. Every effort is made to reduce that, but it is inevitable. Icon pictures are 100 pixels wide and, if they have a blue border, can be enlarged by clicking.

All comments and data by Jeff Goin unless otherwise noted. Much of the data comes from recollection so verify everything before basing any choices on specific models. Motor weights are ready-to-fly except fuel (or batteries for an electric) so they include harness, prop and oil (for 4-strokes). The term “Empty Weight” is universally accepted in aviation to include everything but the pilot and fuel.

Here is a brief summary of the existing kits that I know about.

The former ParamotorKits.com is no longer selling kits. They are a dealer for pre-built machines.

I flew one of their original machines and what they were making for Bruce brown (FlyOhio) when he was in business. It wasn’t the kit but reveals a real, flyable and likely well-built unit.

This kit, formerly sold by Francesco DeSantis, is no longer available.

The I-Flyer’s claim to fame was to require no welding becuase it used pop rivets. The frame was light and apparently held together as well as a welded frame. I’ve flown two machines that were built using this technique and both seemed well built, lightweight and well engineered. It uses the Miniplane geometry and harness but does not have a weight shift option. You could do your own weight shift pretty easily and, if you’re handy enough to build your own, adding weight shift is child’s play. Use an existing unit’s geometry, though, it’s surprising how much an inch or two difference makes in placing the weight-shift bar’s pivot point makes.

One machine I flew using the Top 80 motor was incredibly lightweight and well balanced. I liked it a lot and, with a good running motor, there’s enough thrust for a 200 pounder at sea level.

The web site had little information on the kit or the process but I know of several who have built them.

Build time is probably about 40 hours so it seems comparable to the Skybolt with a hardware kit. A number of these have been built and there is hardware support so you can do less or more depending on your time. Pop riveting is not hard and the tools are probably less than $50. According to at least two people who have built one, it was fairly straight forward. I’m not sure if he is still doing this, but at one time you could work on it at the shop in Florida. Call to find out about this possibility.

There are only two PPG plans out there that I know of, the Skybolt (reviewed here) and EasyUp and you should talk with other trusted pilots before falling for the Easy Up. Read below.

The real deal. There is a group of homebuilders that have flying machines completed and in various stages of construction. At least one of the units was flying at the 2007 Phoenix Flying Circus. I have flown several of them and they are sound, well designed machines. Heavy, but stout and eminently buildable with no welding required.

I hate to say (for those who have already paid) but the Easy Up is almost a scam. The plans are essentially worthless and I’ve never seen one built, let alone fly. I’m sure they have been but, in all my travels, in all my attended fly-ins, I’ve never seen even one. And everybody I’ve talked to who bought the plans quickly learned that it was far more involved then initially let on.

It’s understandable that you be skeptical of hearing it only here but look around. Look at the yahoo groups to see which model has an active support group. Do yourself a favor and ask around.

The incessant advertising of EasyUp “backpack aircraft” is what got me to start advertising Footflyer in the first place when I found out how many people have been snookered by the marketing. Fortunately, they’re only out $95 but, if you’re gonna spend the money, spend it real plans that eventually lead to real flyable products. The EasyUp, for example, has no hardware option where the others do.

If you choose the kit route, several options exist but not with the EasyUp. No kit and, more telling, no support group. Any of the kits mentioned above are bonafide paramotor people who are current and supporting of hardware in the field.