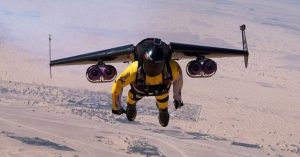 If you’ve encountered the term powered skydiving, we’d like to clear up what it is.

Skydivers fly their bodies in free fall. That is, in fact, their objective: free fall. For most of skydivers, the canopy is merely what allows them REPEAT the process.

Some skydivers have used wingsuits to slow their free fall even more than what spreading hands and legs can allow. Then some have added power, the most famous being “Fusion Man” Yves Rossy who, on Sept 26, 2008, flew his jet-powered body-wing accross the  English Channel and then deployed his parachute to land safely. Now that is powered skydiving!

Skydiving is obviously a completely different animal from powered paragliding. Even when under a canopy the difference is huge. Although the controls work the same way, the difference is like that between a landing space shuttle and a Cessna.