Printing Money out of Thin Air 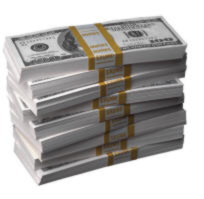 This article was interesting in how it shows the mechanism for what we now call “printing money.” Some people think that money comes from presses. It doesn’t, but sadly, the effect is still the same. From an article by Jon Hilsenrath, Wisetrader.com.

Wouldn’t it be nice if you could just print money?

The U.S. Federal Reserve can. It has pumped roughly $800 billion of new money into the financial system over the past seven months, and last week said another trillion dollars or more could be created in months ahead.

But new money doesn’t roll off a printing press and get loaded in armored trucks. The Fed purchases securities or other assets from securities dealers in exchange for electronic credits that amount to cash and are deposited in banks.

The cash credits — known as bank reserves — have grown from $3 billion last August to $776 billion by mid-March. The Fed made clear this week that reserves will soar in the months ahead, as the central bank expands its rescue programs.

Sure, the Fed can literally print money through the Bureau of Engraving and Printing. The central bank’s name is on the money in your wallet. But that isn’t how it expands money and credit. Since August, Federal Reserve notes — also known as dollars — have only increased to $862 billion from $793 billion.

The key to understanding what the Fed does is understanding the securities it buys. This week, it said it would purchase as much as $1.25 trillion of mortgage-backed securities backed by the government-owned mortgage firms Fannie Mae, Freddie Mac and Ginnie Mae. It will also buy as much as $200 billion of debt issued by those firms. And, importantly, it will buy up to $300 billion of long-term debt issued by the U.S. government itself.

The Fed hopes the purchases will drive down long-term interest rates and make mortgages cheaper. When it buys securities, in theory, that should drive up the price and drive down the yield.

Some economists find the Fed’s actions alarming, especially its purchases of government bonds. The Fed is essentially creating money and lending it to the Treasury. Economists worry this will bloat budget deficits.

Right now, though, the Fed’s worry isn’t inflation. With so many factories standing idle and homes sitting empty, it is hard to raise prices. And the cash the Fed has been pumping into banks isn’t being turned into loans.

“It is only if the banking system starts to expand credit that you get higher spending and inflation,” says Ethan Harris, an economist with Barclays Capital.

Officials hope the new money gets more credit into the economy and helps to revive the financial system. If all goes according to plan, Fed officials will pull the extra money during a recovery, pushing interest rates higher before inflation gets out of hand.