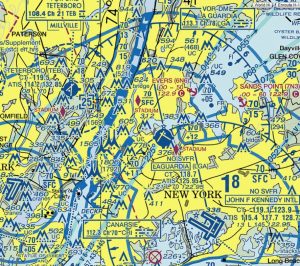 So what is “congested?”

Ultralight pilots cannot fly over congested areas at ANY altitude. Both “over” and “congested” warrant interpretation but here we’ll focus more on congested.

The short answer on congested is: it depends.

It depends on the inspector, the law judge (an FAA employee), and of course the accusation. A moderately trafficked road, two people on a beach, houses as sparse as 1 house per 10 acres, etc.  have been ruled as congested. The fact that most convictions are against airplane pilots is nearly irrelevant. Helicopters are exempt from the congested rule but their pilots have been violated based on case-law definitions for airplanes. Again, it’s up to the judge!

A side note: Yellow areas on sectional charts do not define congested areas. That myth continues in spite of there being no documents support it, including court cases. Charted yellow areas attempt to approximate what the light patterns look like at night, and are notoriously outdated even for that purpose. Those areas may indeed BE congested, but they don’t define it.

The following FAA’s inspector’s handbook excerpt isn’t law, but inspectors are supposed to use it in determining whether pilots have violated a rule, including what constitutes “congested.” Don’t disregard it because of the “General Aviation” mention. Besides inspectors, it may be used by FAA judges.

The congested nature of an area is defined by what exists on the surface, not the size of the area. While the presence of the nonparticipating public is the most important determination of congested, the area may also be congested with structures or objects. An area considered congested for airplane operations could be equally congested for helicopters. If an airplane flying over a congested area at less than 1,000 feet above ground level (AGL) is in violation of 14 CFR § 91.119(b), the area may also be a congested area for a helicopter conducting external load operations. However, the most important word in this concept is ‘over.’ Helicopters can operate over relatively small uncongested areas because of their maneuvering
abilities.

(b) Densely Populated Area. Title 14 CFR §§ 91.313 and 133.45(d) use the term “densely populated” area. Those areas of a city, town, or settlement that contain a large number of occupied homes, factories, stores, schools, and other structures are considered densely populated. Additionally, a densely populated area may not contain any buildings but could consist of a large gathering of persons on a beach, at an airshow, at a ball game, or at a fairground. NOTE: While the presence of the nonparticipating public is the most important determination of congested, this definition also applies to structures, buildings and personal property. The congested nature of an area is defined by what exists on the surface, not the size of the area.

More Case Law and Other Interpretations

PPG Pilot Dana Hague, whose focus on facts grant him much respect, did some digging and came up with this treatise on the yahoo PPG Big List. Some of amounts to wishful thinking but at least has other government backing. Like this one from the European Regulations (JAR-OPS 3):

Congested areas,” as defined in JAR-OPS 3, are essentially any densely populated town or city where no open spaces exist to permit a safe emergency landing in the event of an engine failure.

Oh if only that were true, especially given how small an area we can land in. Alas, that’s not the case so don’t put any merit into it.

Over a few years I’ve poked around online trying to get a handle on the “congested area” issue. I could find surprisingly few cases involving ultralights, which could be a good thing, indicating that we aren’t considered too much of a problem, but there are a few involving Part 91 operations (usually involving low flying or aerobatics over congested areas). What follows is various opinions, with links, and my own comments interspersed.

from ntsb.gov NTSB Order No. EA-4188, about low flying over a highway: “…The deputy sheriff riding in the passenger seat testified that the aircraft operated over the freeway for at least 30 seconds, at an altitude of 75-100 feet… In the Board’s view, even if Interstate 5, a major California freeway, is not “bumper to bumper” on a late Saturday afternoon, moderate traffic in every lane still renders it “congested,” for purposes of the regulation. See also Administrator v. Dutton, NTSB Order No. EA-3204 (1990) (Moderate traffic on a highway at 12:55 p.m. is a congested area for purposes of the minimum safe
altitude regulation).”

from http://www.faa.gov/programs/en/ane/noise/submit.cfm:
“There is no regulatory definition of ‘congested area’. Administrative case law has determined what is congested on a case-by-case basis. [Case references are available on request]). The public should be aware that an area does not have to be completely free of persons or properties to be considered noncongested. Additionally, it is possible that small, noncongested areas as small as an acre
or two may allow aerobatics to be performed without violating 91.303’s stipulations.” DMH note: 91.303 prohibits aerobatics over any congested area of a city, town, or settlement or over an open air assembly of persons (sounds like 103, doesn’t it?)

The FAA has actually has stated in a 1979 Legal Opinion that it will be determined on a case-by-case basis. Below is a copy of the Opinion–note the FAR references have changed.

“In response to your letter dated August 28, 1979, and subsequent telephone conversation, we offer the following answers to your three questions. The facts on which our interpretations are based are as follows:

A fixed wing aircraft operating at an altitude of 600 feet flew directly over a populated subdivision of Prince William County, Virginia. The subdivision consisted of at least 40 residential homes on one acre lots. While operating in this area, the aircraft made a number of steep turns over one of these houses.

1. What is the interpretation of the term “congested area of a city, town or settlement” as that term is used in Section 91.79(b) of the FARs?

The meaning of the term “congested area” is determined on a case-by-case basis. It first appeared in the Air Commerce Regulations of 1926. No abstract regulatory definition has yet been developed. However, the following guidelines indicate the interpretations of the Civil Aeronautics board (now National Transportation Safety Board) in attempting to give meaning to the term.

a. The purpose of the rule is to provide minimum safe altitudes for flight and to provide adequate protection to persons on the ground. Thus, it distinguishes flight over sparsely settled areas as well as large metropolitan areas from low flying aircraft. Thus, size of the area is not controlling, and violations of the rule have been sustained for operation of aircraft: (i) over a small congested area consisting of approximately 10 houses and a school (Allman, 5 C.A.B. 8 (1940)); (ii) over campus of a university (Tobin, 5 C.A.B. 162, 164(1941); (iii) over a beach area along a highway, and (iv) over a boy’s camp where there were numerous people on the docks and children at play on shore.

b. The presence of people is important to the determination of whether a particular area is “congested.” Thus, no violation was found in the case of a flight over a large shop building and four one-family dwellings because, in the words of the CAB examiner, “it is not known (to the court) whether the dwellings were occupied.” In that case, the area surrounding the buildings was open, flat and semiarid.

c. The term has been interpreted to prohibit overflights that cut the corners of large, heavily congested residential areas. As made clear in FAR 91.79, the congested area must be an area of a city, town,
or settlement.

2. What is the interpretation of the term “sparsely populated areas” as contained in Section 91.79(c)?

While this term is not expressly defined, we can conclude that it is something other than a congested area under Section 91.79(a). A subdivision of at least 40 occupied residential homes on adjacent one acre lots in Price William County, VA, would not be considered a sparsely populated area. Such a subdivision would well constitute a “settlement” under the rule.

Please feel free to contact us if we can be of further assistance.

Interestingly, although the FAA doesn’t explicitly define “congested area”, other countries do:

One other area where the FAA talks about congested areas is for helicopter external load operations, which have all kinds of requirements when done in congested areas, requiring a “congested area plan”. This is interesting because the low speed and maneuverability of a ppg makes it similar to a chopper in some ways (one can even say the pilot is an “external load” 🙂

from http://www.faa.gov/avr/afs/faa/8700/8700_vol2/2_102_00.pdf:
(CHAPTER 102. EVALUATE A PART 133 CONGESTED AREA PLAN (CAP))
“(a) Congested Area. The congested nature of an area is defined by what exists on the surface, not the size of the area. While the presence of the nonparticipating public is the most important determination of congested, the area may also be congested with structures or objects. An area considered congested for airplane operations could be equally congested for helicopters. If an airplane flying over a congested area at less than 1,000 feet above ground level (AGL) is in violation of 14 CFR § 91.119(b), the area may also be a congested area for a helicopter conducting external load operations. However, the most important word in this concept is over. Helicopters can operate over relatively small uncongested areas because of their maneuvering abilities.”

In Europe, as they consolidate air law, they are looking at the concept of “exposure time” as a way to evaluate helicopter safety over congested areas. I don’t think any of use would like to see 103 go this way, but the idea is an interesting way of looking at safety:

from http://www.aviationtoday.com/cgi/rw/show_mag.cgi?pub=rw&mon=1200&file=1200jar.htm:
“Hostile environments,” as defined under JAR-OPS 3.480, include areas where “a safe forced landing cannot be accomplished because the surface is inadequate”; where there is “an unacceptable risk of endangering persons or property on the ground”; and “those parts of a congested area without adequate safe forced landing areas.”…

“Congested areas,” as defined in JAR-OPS 3, are essentially any densely populated town or city where no open spaces exist to permit a safe emergency landing in the event of an engine failure.

“Another concept created by JAR-OPS 3 was that of “exposure times.” Performance Class 1, Category A helicopters can fly over hostile and congested areas, but JAR-OPS 3 allows Performance 2, Category A helicopters to fly over hostile, non-congested areas with an exposure time, the length of which depends on a target engine failure probability of 5 x 10-8.

“This translates, in practical terms, to exposures ranging from a few seconds to several minutes.”

Know your stuff, fly legal and don’t worry about the Rogue Inspector. The unreasonable ones are fortunately far and few between.

As always, nearly all conflicts stem from complaints by John Q Public. Fly in a way that doesn’t attract undue attention and you’ll probably be ok. Avoid being a noise nuisance or having an appearance of endangering others. Have fun and wind it up, just do so discreetly.