Emotions run high regarding the decision to carry a reserve, or rescue parachute. It’s a safety device, like many others, that has benefit with some tradeoffs. If you do choose to carry one, learn to use it!

Know that wearing a helmet probably adds more safety than wearing a reserve. One PPG fatality involved a pilot crashing into wires and falling. Paramedics determined the pilot would have lived had he been wearing a helmet. Other fatalities might have been prevented with a helmet, too.

The PPG Bible covers mounting and using a reserve but you should find an instructor who is familiar with your chosen model. Without training, the reserve can add as much risk as it mitigates although accidental deployments have, fortunately, proven rare in powered flight.

If you answer yes to 1 or more of the questions below and are at or beyond the PPG2 level then you would likely benefit from carrying a reserve. 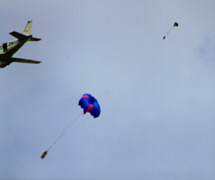 The pulled apex type of reserve has become common—it provides more lift with less fabric than a basic round, making it more compact. It has proven quick to open and reliable. There are several good brands to choose from but the one that I’m most familiar with is Quantum series from High Energy Sports. Both the product and business enjoy a good reputation. Stu Caruk, a free-flight pilot who’s opinion I value, also recommends the Metamorfosi Conar brand reserve.

We know of at least 5 pilots who feel they were saved by their reserve parachute. One was flying several hundred feet high on a nice evening and got surprised by level 8 turbulence. It’s impossible to know how these would have ended without the reserve but subsequent videos of similar situations suggest that most would have survived either way.

1. A pilot in Salt Lake City was flying in strong mechanical turbulence and took a major collapse with complications. He was unable to recover the wing and had to use the reserve.

2. A pilot flying in moderate conditions near Columbus, OH got into severe turbulence.

3. While flying in thermally conditions a pilot encountered strong turbulence in North Carolina.

4. A pilot flying during early evening of an otherwise light thermal day, encountered level 8 or higher turbulence. He was several hundred feet high and tossed the reserve by 200 feet.

5. A pilot flying a trike in aerobatics botched a loop and went through his lines. Although the wing appeared to recover it’s unknown how it would have flown. He landed safely under the reserve.

Several instructors feel that beginning paramotor pilots should not use a reserve. As much as these instructors would like to profit from the sale of one, they don’t find it in the new pilot’s best interest. Reasons include:

It appears that about 80% of all paramotor instructors who’ve been teaching more than a few years hold this view. Instructors with a free-flight background will be far more likely to have their students wear a reserve from the start since that practice is common in free flight.

If you do use a reserve, learn how to mount and deploy it. The motor pilot’s deployment creed is “Kill, look, pull, clear and throw.” That is, kill the motor, look at your reserve handle, pull the handle, then find clear air to and throw it that way. A plasticized, small, checklist with this statement is part of every USPPA membership packet.

It’s almost universal that free-flight pilots fly with a reserve parachute. There’s a number of reasons but mostly its because they have a reasonable expectation that it may save their life. Even for ridge flying, which is almost always done within a hundred feet of the ground, they offer protection. 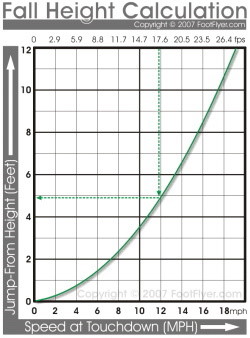 Soaring pilots necessarily fly in conditions strong enough to keep them aloft. That’s riskier and more likely to result in complications from a collapse that will require a “toss” (of the reserve). I’ve seen and experienced numerous significant collapses at thermal soaring sites and watched at least 4 reserve rides although 1 was from a mid-air.

How hard will you hit after deploying a parachute? It can be expressed as what it would feel like to jump from a particular height. The Fall Height Calculation chart helps.

Example: At your weight, the reserve parachute maker says that you’ll fall at 17.5 feet per second (fps). Go down from 17.5 to the green curve then go left to the height in feet that you’d have to jump from. In the example, it’s about 5 feet.

That means that jumping from a 5 foot ledge will approximate your landing under that reserve parachute at your weight.

For example, if you fly in beach air all the time than the probability of having a wing collapse is much, much less than if you fly inland during mid-day conditions. If you fly on a beach when the wind is blowing out to sea, or an area where prevailing winds are out to sea but are currently on shore, than your probability of turbulence or a wing collapse go way up. No, we can never perfectly predict when turbulence might strike but sure can pick the most unlikely times and places. Mornings and evenings are dramatically less likely to serve up wing-collapsing turbulence in typical inland locations.

If you rarely venture above 50 feet then the probability of a reserve saving you, even if you have a collapse, is nearly zero. The more time you spend above about 200 feet, the more you’re in the save zone.

There are few absolutes regarding safety choices. Just choosing to fly incurs significant risk. Choosing to fly without a helmet, without a reserve, to fly in rowdy weather, to fly low, etc. are all choices that add risk in varying amounts. Choosing to, or not to wear a reserve is no different.