The Cheap Trike (Now called Falcon) is powered by a 4-stroke generator motor spinning a huge prop. inside of an appropriately sized cage.

It is cheap to buy, and doesn’t look as refined as others, but quality appears completely sufficient. It’s meant to offer affordable flight, not win beauty contests. 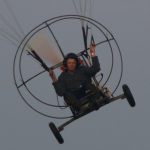 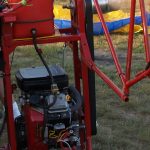 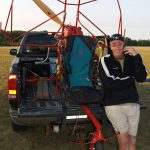 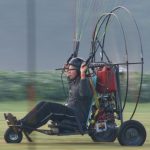 Having a Briggs & Stratton 4-stroke has a several advantages. It sips fuel, is incredibly quiet, especially given the large prop, and can be worked on by most lawn mower repair shops. Just make sure to bring the motor in separately which thankfully requires removal only 4 bolts, a fuel line, and loosening the belt. Hopefully they won’t ask what it was on.

I flew the craft in Kankakee and found everything quite standard as far as powered paraglider trikes go. The key ignition was a nice touch, turn the key to start it electrically just like a car. It is extremely quiet. Low RPM from the gigantic prop is mostly how it keeps the sound down.

Climb rate is what you’d expect, kind of low. For me it wasn’t bad at all but then I’m 150 pounds. I did fly it on my 22 m² spice and it still gave a couple hundred fpm worth of climb. The seat was plenty comfortable although I did have a bit of lean under power. It wasn’t objectionable. Terry is around 200 pounds and seems to tool around on it right nicely.

Throttle response was good. Not immediate but good enough that I didn’t mind going down low and playing at a few feet. Don’t get stuck in the corn, though, at just over 200 pounds you’ll have your work cut out for you extricating it. At one point I landed on an empty road and just taxied down it. Of course that got me thinking how cool it would be to drive it to the launch site. Somehow I think licensing the prop-drive might be a challenge. Wouldn’t that be cool, though?

I’ve got one of these motors in my basement as a backup electrical generator. They’re made to run, as I suppose most motors are, with minimum fuss for over 1000 hours. The beauty is that, given their mass manufacture and solid warrantees, its likely that they’ll actually do so. Maintenance is little more than oil changes and belt tightening. Gotta love that!

He had this ridiculous looking chloroplast fender on the front nosewheel that I think was for effect. It would work, of course, but was the cheapest looking part of the cheap trike. The only real proprietary parts are the redrive system with its unusually long belt. He did that so the motor could be mounted low, making it tip-resistant. That is, in fact, an excellent idea and renders the craft far more stable than other trikes with a higher center of mass.

Handling was standard with typical, and effective steering. Any cart pilot will feel at home.

One minor safety concern, shared with lots of wheeled craft, is that there are no bars in front of the pilot. That open view is nice for flying but, during an aborted launch, if a line snags in the prop after falling around the pilots neck it could be bad. A recent incident like that revealed this risk that I had never thought of. He has a version of the machine with bars that go down to the feet and I would recommend ordering with that option.

Overall it’s a great way to get airborne and probably one of the cheapest to fly.

As always, don’t skimp on training. It’s still an aircraft with the many ways aircraft have of causing damage to falling bodies.