Don’t be fooled—ditching with a paramotor can be fatal. Success stories may lead some to think it’s trivial but it’s not—about 1 in 30 pilot’s have died after going in, including one who made it out his paramotor only to die while swimming to shore from exhaustion. The Agama system was developed to give pilots an fighting chance if they go in the water.

See also how to reset the Agama after activation.

2019 Apr 15 Update: Other models are now available that do the same thing as Agama. Having some form of auto-inflating device on the paramotor has proven to be a life saver and drowning is no longer the number one way to die from paramotoring.

There’s no doubt that the system, used properly, will prevent any machine from sinking. But I had reservations regarding other issues. What if the pilot goes in face first? Could it inflate in such a way as to hold his head down under water? With an empty bottom-mounted gas tank that scenario seems almost likely.

When Paul Czarnecki of UCanFly2.com gave me an opportunity to test one, I took it. He instructed me on its use including tips on how best to mount it which I’ve included here. This is is what I found.

For one, it is extremely well made. The Czech company that builds these also does them for other industries. It’s a first class, professionally produced product. Weight is under 2 pounds and, being against the frame, its weight doesn’t pull you back at all.

View video of Agama going into the water with a paramotor

How It Works Overview

The U-shaped device has single-use CO2 bottle and sensor located down low on one side. When the sensor gets submerged (it won’t activate just by getting wet), it triggers the bottle to empty which quickly inflates the cavity. After activation the sensor and bottle must be replaced. New ones are about $30 for a set.

Inflation is very quick, probably about 1 second and it will remain at least 90% inflated for probably several hours. If it doesn’t auto-inflate there’s a pull handle to trigger the CO2. And if the CO2 bottle malfunctions there is a blow tube that you can inflate it manually. Of course you’d need to have your head out of the water for that to help.

They say the device will float over 400 pounds which means it would probably need a buoyancy of around 50-100 pounds since the 400 pounds of pilot and paramotor will displace 375 pounds or so depending on construction and how full the paramotor’s fuel tank is. That requires an inflated volume of about 13 gallons (100 pounds / 8 pounds per gallon of water) which seems reasonably judging from the inflated size.

The most important mission of the device, though, is to keep your face above water. Thus the reason for testing. 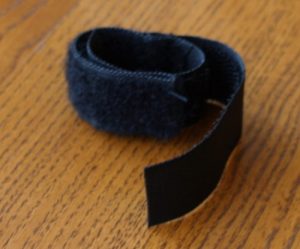 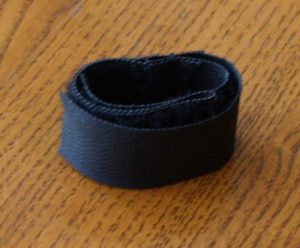 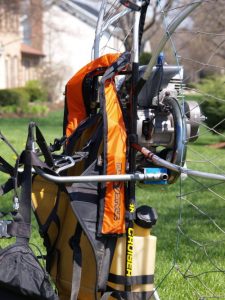 The system is painless to mount—enough so that pilots won’t mind using it only for their over-water flights. It comes with these ingenious double velcro straps that hold it to the frame although the importer recommended using cable ties in addition. I used only what came with it. It must be mounted reasonably high up on the frame for best effectiveness.

My machine has weight shift bars that would chafe against the Agama. Taping a piece of plastic to the Agama would solve the problem but I didn’t bother for the test. As you can see from the picture (top right), I put it inside the bars but, depending on your model, it might be better to put it on the outside. On low hook-in units I doubt it will be a problem because the Agama’s vertical portions will be above the pivoting bars.

My paramotor hasn’t been this clean since it left the factory. I didn’t want to leave mung in Mike’s pool so I cleaned it thoroughly. That took a lot!

The test was designed to minimize my chances for breathing water and maximize photographic coverage. We had two video cameras rolling, two still cameras, two underwater cameras and one person in the water with scuba gear. Yes, my overkill warning light was flashing. 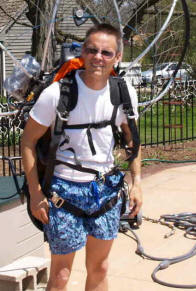 Jeff just before jumping into pool with Agama

Jeff in water testing Agama after getting head up

Mike, Kristen and the Goin Gang

It’s a good thing there was redundancy because one dry camera didn’t do continuous shooting and one underwater camera filled with water. That can’t be good on the film. Both videos were flawless and will eventually be edited into a 2 minute piece for here and YouTube.

After a countdown to get the cameras rolling, I headed off the edge. Just as planned, I went in basically on my stomach and almost immediately started tilting head down. That’s a terribly uncomfortable sensation because, besides being unable to breathe with a weight overhead, water went up my nose. I immediately started thrashing around trying to right myself. I thought the Agama had deployed but it had not—yet. The empty gas tank and motor weight were holding me down. I’ll admit to feeling a bit panicked.

In spite of agitated state, I succeeded in turning myself over. Then a swoosh of air as the Agama inflated as advertised—about 3 seconds after submersion. Staying afloat now was easy. But that didn’t tell me exactly what I set out to determine. What if I wound up face down with the Agama inflated?

So I told the others that I was going to turn back over so that the Agama may be holding me head-down and to be ready for a rescue. That proved unnecessary, there was less force holding me face down with the Agama now inflated and I could right myself easily.

The test was a resounding success and complete endorsement of the Agama’s mission effectiveness.

It appears that, with the system mounted reasonably high on the paramotor, it will allow you easily right yourself even from a face down position. Once in the seated position it will hold you solidly above the water level. In fact, it’s quite comfortable.

This is a safety device. It’s mechanical and can fail so you wouldn’t ever want to completely depend on it. But if you already can’t resist the urge to fly beyond gliding distance of shore, this could easily save your life.

Although it worked flawlessly as tested, the most likely part to fail is probably the sensor. You should rehearse where the manual inflation handle is along with the manual inflation tube. Secondly, you should still follow the practice of having all but one buckle (some instructors say all buckles) unfastened before going in the water on a known ditching. Just like a reserve parachute, you must know where your hands are going to go without having to fish around. Underwater thinking gets weird in a hurry and panic can destroy reasoning ability.

You must also acknowledge that just because this test went well doesn’t mean that the unit will work perfectly in all cases. There may be even worse-case scenarios that I haven’t thought of or it may inflate in non-predicted way. Accept that if you go in the water, with or without the Agama, you may drown!

I’m gonna buy one. There have been several trips where it would have been handy to have and yes, a few places where I’d like to do some over water flying. Plus, besides saving your life, it will save your gear.