The weather was clear but had become quite turbulent. Enough so that two highly experienced competitors had decided not to fly but a number of others continued including Michael Mixer. You watch this fellow fly and he was quite clearly on top of his game. He’s also the consummate gentleman and giver of time, but that’s another story. 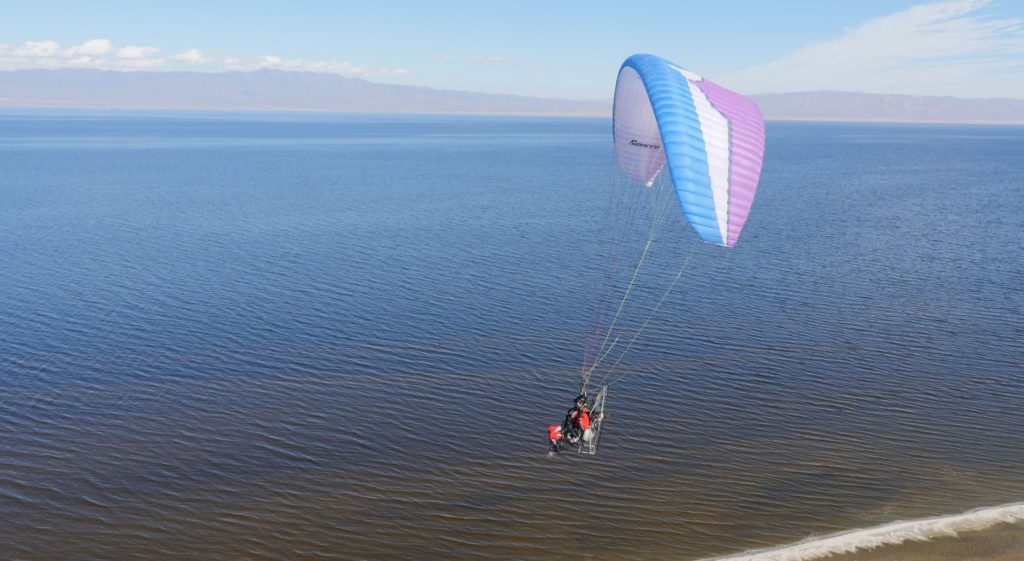 After dropping his sand bag “bomb” and climbing out, Michael Mixer wasn’t doing anything steep or unusual at all, just climbing before shutting down before his spot landing approach. Trims were about an inch out (That’s about 30% from the slow setting on his Velocity Recon). According to both Michael and an observer aloft, he took a sizeable collapse on one side which recovered then another on the other side. What happened next is something I’ve never heard of before — always wondered about but never heard of — one or more lines got in the prop. Whack! Then all hell broke loose and he came down hard.

“Not Michael” was my first thought. This kid just recovered from a mishap at Beach Blast. I only saw the immediate aftermath and didn’t even want to go over. I did, of course, and was thrilled to hear him talking, completely lucidly, about what happened. Clearly he never went unconscious because he described it in lurid detail. The worrisome part was a lack of feeling in his feet.

Rescue services were called and a half hour or so later a helicopter arrived. They stabilized him on a flat board and whisked him off in a swirl of dust. As of Feb 9th at night he has feeling down to his knees with some broken Vertebrae.

There was some severe weirdness gushing over the mountains or out of deep sky. It was like a blush of air came crushing down, burbling in the mix of airflows; first at altitude and then on the surface in places further inland–a convergence with a vengeance. The prevailing onshore flow met some westerly rush in what would have a frothy mix up had this been visible like water. It seethed for about half hour, peaking at about the time Mike was aloft, then settled back into climate.

I was first in the launch order and encountered moderate turbulence, enough to cause a smallish collapse (30%) not enough to make me abort. Still that was some nasty juju. After landing I went over and mentioned to Michael, who was preparing to launch, that it was really turbulent–not to suggest aborting–but to just be a bit less aggressive. He then launched a flew a normal cloverleaf. Shortly afterwards, Ryan Shaw entered the course, hit weird air and abandoned the day. Ryan’s not just a good pilot, he’s got Titanium balls. That was significant but not enough. We continued with the bomb drop.

After my bomb drop, while climbing up in turbulence, I watched as a non-competitor, off in the distance, took a 40 to 50% collapse with a big turn. Wow, I thought, I’m glad I’m not that far inland, then proceeded to do my micro spot landing. A few minutes after I landed, Michael launched for his bomb run and fateful climb out.

Later on, after the crash, I talked with MANY pilots who reported collapses and nasty air. Plus there were reports of 21 mph winds blowing the opposite direction only a mile away. Clearly there was some weather weirdness afoot. And this may be the most important lesson of all. Yes, we must look at the wing, but more importantly we must look at how we deal with weather information. Pilots hate having their go/no go decision made for them but maybe it’s time we be more pro-active. If there is something going on weatherwise that is out of the ordinary, especially in a place with a history of quick nastiness, I say would support the organizer closing the LZ for departures.

Is Competition Worth It?

Flying is risky yet we all do it. Is it worth it? That’s a question only individuals can answer but when something like this happens, it does tend to reset our bar. I’m not sure if I’m even gonna fly tomorrow. I suppose I will because there’s some stuff I’ve been offered to try but it takes the wind out of your sails.

I asked Chris Santacroce, who competed for the first time in one of these events, how it worked when he was competing in Acro. He said injuries were essentially non-existent because they went in the water. Some have suggested water (with Agamas and a boat) but, of course, it takes someone willing to run it which is hard even on land. It sure would seem to be less risky given appropriate precautions to prevent drowning.

We do almost identical tasks as what the FAI competitions do, risk-wise, all over the world. That doesn’t mean they’re safe, of course, but we all recognize elevated risk so it’s a matter of degree.

And realize he wasn’t doing any maneuvering at all when it happened, just climbing out, and at an altitude that many others were flying. Plus, he was even closer to the water than many others had been. But still, he may not have been in the air had the pressure of competition not put him there. I strongly suspect that, had the completely bizarre bit with lines getting into the prop not happened, he would have recovered fine.

Will it continue to be worth it to me? I don’t know. This wasn’t anything he did and, although I know people will speculate that it’s the wing, I’m not convinced. It was the first time lines got in a prop in flight that I’m aware of but my fear is that essentially anybody, in that piece of air, would have likely experienced the same thing. A reserve? Maybe. Few of us were wearing reserves nor is there any certainty it would have helped but it wouldn’t have hurt. His initial collapses started at about 80 feet.

Only time will tell as to the answer of this question of worth but, right now, with the episode so fresh in my mind, I have doubts. There’s a time for everything. If there is another competition at the Salton Sea, and even for the general flying, organizers must be quick to halt the action early on when unusual turbulence rears its head. Sadly, I can say that I will not likely run one. Even though I was just a competitor here, I don’t think I could stomach this sort of thing.

Michael Mixer is the type of people that the world could use more of. This was painful. For Mike obviously, but for his MANY friends, his family, and for the sport. Here’s wishing you the best for a speedy recovery, Michael.

2019 May update: He is flying, getting around well and with only intermittent use of a cane or other aid.

2013 Feb 20 Update From Michael Mixer: He now has a small amount of movement in both legs. This is an extremely good sign and there is a good likelihood that, with much painful therapy, he will regain at least some use of his legs, hopefully enough to walk.

In the accident he completely shattered the L1 vertebra, shattered L2,L3 and severed the spinal cord. Mike said: “All I could think about when it was happening was why me again? I just don’t understand it. I know I got in a big up draft and then a sudden down draft that collapses my glider. A few seconds later as I was working on getting it reinflated I hit another down draft which pushed my glider into my prop and wadded it.”