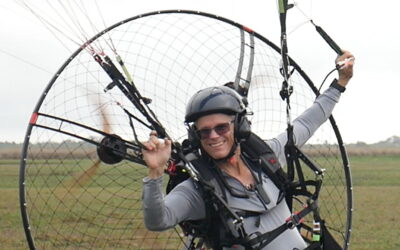 I recently got a question about the state of ePPG. Why don’t we see more electric paramotors?

As a big fan of the breed, I’m rooting for its success, but am also a realist. Go to a gathering and you’ll find very few, if any, electric paramotors. Why? Not surprisingly, it’s mostly about duration. One group I’m not addressing is soaring pilots who are just looking for a ride to the thermally heights. Even for them the options are fleetingly small, but this is for motor pilots who favor flat air and mostly level flight. Even for pilot who like to tear it up, a lot of their flying tends to be level in that it’s not doing a lot of climbing and diving, especially when footdragging and doing level steep turns.

Let’s realistically consider an ePPG that weighs about 60 pounds.

If you fly it efficiently, meaning a climb to 200 feet then cruising around until it won’t hold altitude, you’ll get about 40 minutes. But that’s like how long a machine flies until running completely dry. Most of us don’t like that–we want some buffer. So a 40-minute-to-empty machine is about a 30-minute-with-reserve machine.

If you fly it with some footdrags, climbs, and turns you’ll get about 30 minutes, meaning that 20 minutes is realistic for most.

Most pilots at least want the option of going longer even if they rarely do. Consequently, the ePPG is a pretty small market.

There is immense opportunity here. Immense. I HATE having to work on the many maladies foisted on us by finicky flyers. It’s actually quite satisfying when I do solve some problem, but I usually have a dozen other things I’d rather be doing. The absolute worst aspect is when you go to start and it won’t. Uggh. Super uggh. Which of 96 problems could THIS be?

But right now there are people who have problems with their electric units, too. It WILL get better, but when an electronic speed controller go out, you’re not gonna get it running by “cleaning the carb” or any of the other many things we do to resurrect recalcitrant 2-strokes. You’re done. Much like gas engines, some electric motor pilots have had lots of problems while most have pretty trouble-free experiences. Still you read about proper soldering, setting things up, new versions of this or that helping with some problem, etc. Teething pains.

How about solar charging to fly or while flying?

No. That’s a long way from happening. It just takes too many kilowatts to fly your sorry arse versus how much energy the sun doles out per area. If you have a 15kw solar charging system on your small house, you probably have enough extra energy to charge the paramotor unless you’re charging a pair of Teslas or something similar.

Look at electric cars. Early adopters paid dearly when someone finally came out with a cool car that happened to be electric. I honestly don’t know why nobody has come out with a super-robust e-paramotor that costs $15k. Of course it will be a tiny market, but still, with decent profit margin, it would still seem reasonably appealing. Maybe soon. In a world where people pay $100k for a car that does essentially the same task as one you can by for $30k, I say there are buyers. But the product must be worth it.

To me, it’s just time. I’m a fan, but I’m also a realist. I’ve got a Tesla, Power Walls and solar, but realize that we’ve got a few years before that all hits the mainstream. And that’s with wheels that can carry the higher weight.

I don’t think it’s as bad as the prospects of Fusion (always 10 years away), but it will be a steady climb with more people joining in gradually until endurance passes at least half of what gas motors typically provide.