Becoming a Tandem Pilot, Filming, Flying the Green Eagle and other assorted bits

This past week has been most eventful and a lot of fun. I headed for Christmas, FL, primarily for the purpose of getting Tandem Trainee certified so I could legally get the requisite experience to become a Tandem Instructor. Quite a few existing USPPA pilots have signed up through the grandfather allowance, but we (three of us) are the first group to go through the USPPA program start to finish. Now I need to get 24 flights with a certified pilot. 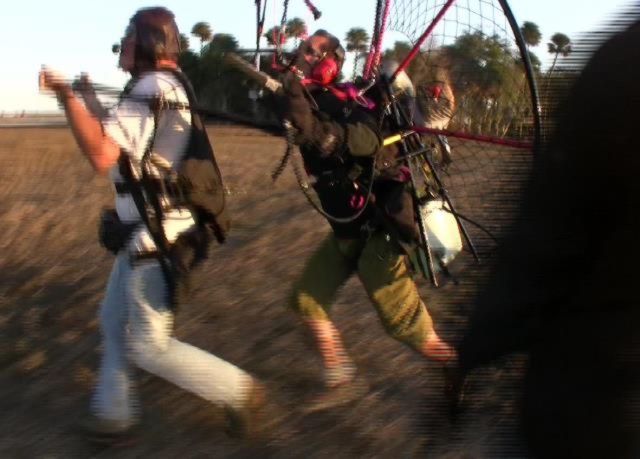 There were four of us total but one, Scott Adair, was actually eligible for the grandfather program and just wanted to brush up.

Tandem flying adds a serious dimension to the operation. Besides the obvious increase in responsibility, it’s quite a bit more challenging, especially doing reverses. You can’t face the wing and the risers are necessarily farther away since they’re hooked to a spreader bar. Then there’s the weight of it all. And as a 145 pounder, that could get to be a factor although it didn’t turn out to be an issue.

The flights actually went completely uneventful, including one forward where the wing came up a bit crooked and I had to maneuver under it. The tandem program is all new and we were guinea pigs. Eric, of course, has done a gazillion of them, but we’re all learning the new program. Eric and Chad will be helping revamp the program, along with input from other tandem instructors and I know I’ll offer input after going through this. Eric did a great job, in spite of recovering from some sickness.

Now I’ll be on the prowl for a lightly used tandem wing. Ashton Brunner, a builder of many things (as you’ll see below), has a nice looking tandem bar setup. I may be purchasing one of those if I have enough room for it on the Enterprise. Judging from his Green Eagle, it will be a quality device.

Ashton was also getting his USPPA instructor and Tandem certification. But he brought his new creation, the Green Eagle quad, that runs on Propane, for us to play around with. You could fly to the site, pull the propane tank off and plug it into your grill. Kinda handy! I’ll have a more proper review up in the reviews section. It was incredibly stable, what with those wide wheels, and very stoutly built. Not surprisingly, it was also very green.

I flew it once and taxied with a wing overhead another time for the purpose of getting video. Several pilots beat around on the thing like a go cart, trying to flip it (they couldn’t) Of course with a wing overhead, the CG effectively goes up and it would be able to be flipped but it would sure take a lot to do so.

There wasn’t enough timeto do any kiting video but we’ve got most of that in the can, anyway. But we did get a bunch of the required footage for videos 2 through 4 on launch, inflight precision and landing. The coolest was inflight precision. Using the Parabarge, a surprisingly agile platform, Stan Kasica flew behind and close while I recorded his moves using a steadicam. It looks cool. More importantly it will let me do the explanations I envision.

On the way back from tandem flying, I got an unplanned treat. Mike Britt, who built the barge, is a high order pilot of his own right. He had flown out from his field and was now flying back with the boat. Let me tell you, that turned out to be some amazing footage. The sun was setting in the west and those shots, over the water, with river wilds in the background, illuminated by color shades only a sunset could generate, are amazing to look at. Too bad this won’t be a music video. Eric expertly matched speed with the boat and I just let the tape roll. It was some good stuff.

Pool was played (not by me, that would be embarassing), too much food was consumed and I enjoyed seeing the many wing remains in line for healing. Elisabeth is fanatically meticulous with the gliders. I’m amazed at how torn up a wing can be but still come out whole.

It was a great time and the Florida flyers are all great people to hang around with. In fact, they were all so much fun that I wound up hanging around a couple more days. Hopefully I didn’t wear out my welcome. Powered Paragliding is lucky to have them.