Here are just some ideas for fun competitions created to decrease risk if the event is flown over land.

The following requirements are meant to keep using pilot’s bodies. This would be tough for most competition pilots who fly uncertified wings at super high wing loadings. This would not be for them. It’s intended more as a lower-risk, fun affair that can reasonably be flown over land. There’s always SOME more risk in competition but it had become so bad that doing it over water was necessary. And that’s STILL the best bet, it’s just not practical.

This task, timed touch and goes, is borrowed from our weight shift brethren. There are three targets, Target1, Target2 and Target3. Target2 is located 2 meters upwind of Target1. Touching Target3 starts the time. Pilots may have this target located such that it can be stepped on as the launch run is initiated. That would insure hitting the target but slightly increase the time.

You touch the primary target during launch. After launch, fly 2 touch and goes then come in for a final landing. Time starts from the pilots touch of launch target and ends at the last Target2 touch. Additional rules:

1. Each round requires an airborne period of at least 5 seconds.

2. Pilot must touch two targets, Target1 then Target2, on each landing and in the same direction. This is to help ensure that pilots complete a 360° turn on each pattern.

3. The wing must not touch the ground between initial inflation and the last target2 touch. This is intended to require good control and not allow pilots to drag their wing behind after a botched landing.

4. Missing any target reduces the final score by 25% for each target missed. There are 7 targets touched on a properly completed task.

5. The pilot must touch the Target during the initial launch before becoming airborne. The feet not touching the ground for more than 3 seconds or a foot rising above 1 meter constitutes being airborne. 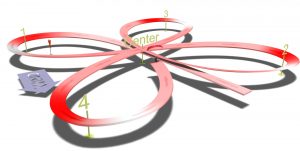 The current Cloverleaf is a wonderful test of precision flying. It requires the pilot kick a center stick and fly around each corner stick. The problem is that it can be hard to judge whether the pilot went outside or inside a corner.

The solution is to require kicking each stick, not just the center. All the same strategies apply but are skewed slightly. For one thing there’s more emphasis on accuracy over speed. Also, the cage is allowed to be what hits the stick. Both of these rules allow for electronic timing and minimal marshaling. Nobody has to mind the order and the computer can determine that the pilot went in the correct order. Same with a human marshal who can easily see whether or not a stick moves but doesn’t have to try judging corners or mild ground contact. It eliminates the frequent “i think he touched” issue. Touch all you want. Run the course with the wing overhead if you think you can get more points that way.

If a course is run over land then speedbar should not be allowed.

Use the current FAI rules but with AutoSticks. That is, pilots fly the slow while kicking four sticks then do the same at their highest speed.

This is best done in a sand pit. Run it just like now except that only require pilots to complete one 360° after shutting off their motor. So they might only bee 150 feet high when they shut the motor off. Use the first point of touchdown. If two feet touch within 1 second of each other, use the farthest one.

There is no practical way to score this electronically. A marshal must be ready with tape and take a reading to the target.

For maximum discernment of actual spot landing skill, penalize traveled distance after first touchdown so that land-and-stop is rewarded.

Another possibility is to REWARD distance traveled. That increases risk in the same way swooping has proven deadly in skydiving but adds another interesting element.

Do this just like it is now only instead of gates, require the competitor to touch targets so that it could be scored mostly electronically. The pilot must use one foot to whack the target while dragging the other. The three targets are placed staggered but into the wind as much as practical.

Do this just like it is now only the pilot must make his first and last touch on two targets placed 20 meters apart. The pilot touches down, makes exactly 10 steps (first step plus nine more) and takes off again. Penalties apply for too few or too many steps but the biggest penalty is for missing the targets.

Michel Carnet showed us this one during his visit to Eric Dufour’s pace in early 2009.

Set out 5 cones located 2 meters apart, in line and oriented mostly into the wind. The pilot goes up to at least 250 feet as measured by having a minimum glide time of 30 seconds. His goal is to kick the first cone and as many cones as possible without taking a step. A step is the first movement of a foot backwards relative to the pilot. He can slide but, once a foot gets traction on the ground, no more cone hits count. And the cone has to be knocked down or moved entirely off it’s position.

The approach must be into the prevailing wind as established at launch by the judges.