I had no interest in a Tesla until reading about autopilot. One day in 2015 they released a software update that gave the cars level 2 self driving capability. That’s where a driver must be immediately ready to take over but the car controls both speed and steering to keep in the lane. And indeed drivers reported it working quite well. That was enough. We went to test drive one and dang if it didn’t work splendidly, even in city traffic. It came to a stop when the leading car stopped and accelerated up to speed again. It’s not perfect, for sure, and I had to intervene when it lost the lane markings, but on a well marked road it’s brilliant.

Autopilot 2.0 was a hardware change, with immense computing power, over twice the sensors, and programming that is claimed to eventually give it nearly full autonomy–Level 4 in engineering parlance. Unfortunately, it was like birthing a new baby that had to learn even level 2 driving. Features kept coming online to reach parity with Autopilot 1 cars and in April, 2017 that happened. We finally took the plunge and ordered one.

To pick it up we did the same thing as for the test drive: flying Ellie over to a small clearing near the dealership.

We gambled that the site was still available and it was. An airport just to the north was our plan B. You really can’t even see it from the road unless you’re looking for it. I was off to the side enough for a tractor to get by if needed although that put it on a slight slope.

The car uses a combination of radar, sonar (isn’t that for submarines?), lidar and cameras to read it’s location. More importantly, though, are high resolution GPS maps that provide information on lane data.
It’s a remarkable capability.
Remember when talk of self driving cars required that roads be equipped with special guidance wires? 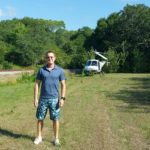 Tim standing in front of Ellie before picking up our Tesla 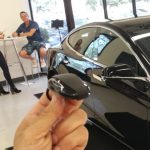 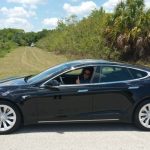 Tim dropped me off at the Helicopter before he heads home

My view out of helicopter after leaving Tesla dealership 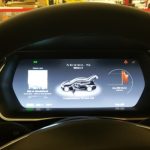 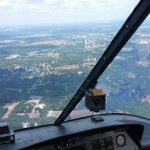 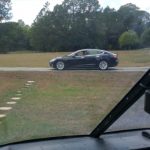 Tim arrives home about the same time I’m finishing up the shut down. 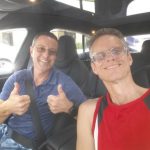 Tim and Jeff driving the Tesla for our first trip

Using radar has been officially touted on Tesla’s website as avoiding UFO’s better than even a human driver could. Of course that sounds ridiculous which is the effect they’re looking for but it’s embedded in a pretty detailed discussion about how Radar is used in Autopilot 2.0.

These are the most widely accepted levels of automation. Unfortunately Tesla’s term “Full Self Driving” (FSD) doesn’t appear anywhere and she’s definitely nowhere near ready for Level 4 which is what I think of as FSD.

Level 0 – No Automation: The full-time performance by the human driver of all aspects of the dynamic driving task, even when enhanced by warning or intervention systems

Level 1 – Driver Assistance: The driving mode-specific execution by a driver assistance system of either steering or acceleration/deceleration using information about the driving environment and with the expectation that the human driver performs all remaining aspects of the dynamic driving task

Level 2 – Partial Automation: The driving mode-specific execution by one or more driver assistance systems of both steering and acceleration/deceleration using information about the driving environment and with the expectation that the human driver performs all remaining aspects of the dynamic driving task

Level 3 – Conditional Automation: The driving mode-specific performance by an Automated Driving System of all aspects of the dynamic driving task with the expectation that the human driver will respond appropriately to a request to intervene

Level 4 – High Automation: The driving mode-specific performance by an Automated Driving System of all aspects of the dynamic driving task, even if a human driver does not respond appropriately to a request to intervene

Level 5 – Full Automation: The full-time performance by an Automated Driving System of all aspects of the dynamic driving task under all roadway and environmental conditions that can be managed by a human driver