Wanna Learn Powered Paragliding Safely? Get a wing that won’t kill you.

After analyzing student accidents, including two fatalities, I’ve changed the way I look at beginner wings. This is important: the wrong wing can kill you (here are tips to the perfect beginner paramotor).

Students starting out should start on a bona fide “school” wing. Sadly, even as beginners, we fall prey to internet coolness and wrongly fancy ourselves as “good pilots,” with good instinct. 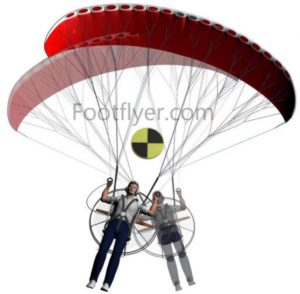 The point around which a paraglider does left/right (roll) oscillations

The problem is that in paragliding instinctive reactions are opposite to what’s needed. I refer to the left-right pendulum that bedevils new pilots and even some experienced pilots.

Instinctive reaction to upset is opposite to what we feel. Relying on such instinct during early training can be fatally wrong.

As the wing rolls right, where does your body go? Yup: left (see below). So the new pilot feels his body go left and instinctively pulls right brake–exactly the wrong input. He’ll aggravate the bank and then, as he starts to swing back the other way, will do it again, aggravating matters even worse into a potentially catastrophic wingover. This is why instructors must make sure their students are willing to go hands up when commanded to because that may be the only input that stops them from subconsciously making matters worse.

The single best action a new pilot can do is start on a very benign-handling wing. Resist the temptation to start on a hotter wing known for better handling. That might be OK after your PPG2 rating but, until then, your survival odds will be dramatically improved with a benign wing. It should be easy to inflate only because that will improve your success. Ideally it will come up easily in no wind and not tend to front tuck. But more than anything it should have VERY forgiving handling such that pulling a LOT of brake will not likely cause a spin and will barely turn.

The Apco Prima and Axis Stardust are two examples I’ve flown that exhibit great behaviors for a safe beginner wing. There are others, no doubt, but I simply haven’t tested them. The Power Atlas would be a good choice if it inflated easier. It’s not, don’t go anywhere near this wing! Of course, if you can launch a Power Atlas in no wind, you can launch anything. These are sometimes called school wings because they are so forgiving; even if you pull the wrong brake they won’t let you go too far. Of course the trade off is that you won’t won’t turn much, either, so your training area must be plenty big.

So if you’re thinking about training, besides finding a reputable, USPPA certified school, see about training on a “school” wing that has very benign handling. You may indeed have good reflexes but they won’t do you any good, and may even do you harm if you rely on them in this situation. Insist on a very benign beginner wing, it may mean surviving training.