I lost a friend.

Its always sad to hear of a loss, especially when it happens doing what we all love, and to someone we’ve spent time with. I’m sorry mostly for his family and close friends, my pain pales in comparison with theirs. Mike leaves behind two children, Sarah 16 and David 8 along with his wife, Alma. And he leaves behind a hole in the community of paramotor pilots.

I met Mike in about 2000 during a little fly-in at Nick Scholtes Paradrome. Even then his Paramotor brand machine was dated and heavy. But he didn’t have any problem whatsoever hefting it up onto his PVC pipe stand where he would get ready. Launching that thing was a production, really, but he would always do it with a smile and was pretty good at it. He flew that boat anchor as a badge of honor, having conquered a machine that most pilots had long since relegated to wheels.

Even after he bought a new unit he kept flying that monstrosity.

Mike smiled more than most and knew how to have fun. I have some funny shots of him in one of my videos. He added a lot.

On a layover in Indianapolis, he came out to the overnight hotel, fetched me to a local flying site, provided a motor and we cruised the countryside. He also provided my first flight on a Paramotor brand machine. He wouldn’t dream of letting a friend visit without providing airtime.

He would periodically visit us here in the Chicago area. Now I’m sorry I missed him last month. We just never know. Relish time with your friends. Realize that neither we nor them will always be around. It’s always a reminder of the fragility of life.

Mike frequently lived life on the edge, an edge that finally took him. He drowned after going into the water while foot dragging through a retention pond. He knew of the increased risk in these actions, we talked about it, but it was something he was driven towards. Any of us who fly accept extra risk, some more than others.

Choose risk carefully, our loved ones trust us to come back to them. Lets always try to remember what’s at stake. No, we’re not going to sequester ourselves in a padded room—the allure of flight is too strong. We will press on but I’ll sure try to treat my time aloft with the respect it rightfully deserves.

Mike was one of the humans you would have enjoyed being around. Many did. I sure did.

Alma and family will, no doubt, be in great financial need. The Indianapolis Club will be taking collected donations but they can also be sent directly. Although the family has not, donations would be incredibly helpful as they try to press on. Please send contributions to:

Jason was there when it happened

We all know about the danger of water. We think about how hard it might be to get out of the harness in the event of a water landing, and the danger of getting tangled in the lines.

Maybe you’ve rehearsed quickly unbuckling from your harness. Maybe you’ve run through the scenario hundreds of times in your head to where you’re pretty certain you’ll instinctively do it perfectly.

There are a couple of extra things to ponder when assessing the risk of flying over water. My good friend Mike made it past what one might think is the toughest part of a water landing– getting out of the harness and getting clear of the lines. Mike made it past that part… He was well on his way to shore when he succumbed to exhaustion.

You may be a great swimmer and in great physical shape. You may be able to swim several laps in the pool. But remember, when you jump into the pool you’re usually expecting it, and you’re usually dressed for the occasion. The struggle to get out of a paramotor and get to the surface could very well put you on the brink of exhaustion before you ever head for dry land. Add potential panic factor and things are getting tougher. Then add clothing and shoes and the situation is looking even worse.

In an heroic attempt to save Mike, some of the pilots who were there went into the water. They were shocked at how difficult it was to swim in clothes and boots or shoes. One described it to me as “like swimming in syrup”.

I just wanted to share these thoughts. It wouldn’t be too hard to convince one’s self that the risk of flying low over water isn’t that high. You might think the water isn’t that deep, or that you can swim well enough and have rehearsed the event enough to survive. Just please remember the other factors of a water landing like possible panic, the difficulty of swimming in clothing, etc. when you assess the risk you are willing to take.

And remember that water hazards are everywhere. This most recent tragedy didn’t occur in the ocean or a huge body of water—it was a neighborhood retention pond in the midwest.

Mike Rish and I at the 2007 FL Convention

Darren Smith’s house from above 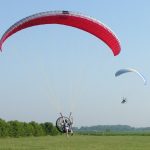 Mike Rish and friends near Monticello to see me off

Group with Mike Rish at Don Jordan’s fly in

Description of Events from Brandon Oberlin

Mike was flying low over water, apparently misjudged the surface, and got dragged in. He sank immediately, unbuckled his harness underwater, surfaced, and swam for shore. About halfway to shore he went under and drowned.

Those of us who were there tried to save him, but we were unable to. Mike was a dear friend of mine, and a household name to hundreds of PPG pilots. Those who know him, know that he lived life on his own terms and lived it to the fullest.

He was one of the most generous people I’ve known: kind, forgiving, honest, and passionate.

He loved flying. He was trained by Alan Chucalate in 1996 and as such, was the most experienced pilot in Indiana, and one of the most skilled pilots in the Midwest. He has left a huge hole—we will miss him tremendously.

Mike was well aware of the risks he took. Risk and reward. He chose his level of risk with full knowledge of the danger involved. PPG, like most other things, can be as safe or as dangerous as you choose to make it. To pre-empt the armchair warriors that will say, “he makes the sport look bad” and all that, I say this to you: “Chose
the level of risk you are comfortable with. Each man makes his own decisions—that is the essence of free will.”

We love you Mike; may God bless you and your family through this hard time.

Thank you for the very nice tribute to my cousin Mike Rish.

We come from a very close family and a very large family.  We will all miss him very much.

I can not even begin to imagine what kind of second thoughts he must have had at the end of his life.  We loved his smile and his heart very much and would give anything to see him again.

Thank you also for reminding your fellow flyers that we count on you to come home to us.