Snowstorm! Getting the plane from ABQ to Phoenix

No paramotoring on this trip but at least I got some gorgeous airplane flying in. After my ordeal in ABQ, it was a relief to be sitting there, motor idling, heater running, wings clean, with a clearance and ready to taxi. I reveled in that moment.

After a short taxi by the Eclipse plant in Albuquerque, I was cleared into “position” and then takeoff from runway 8.

This Bonanza (“Bubba”) has tip tanks. They hold 15 gallons each and, being so far out on the wings, have a big moment arm. When those tanks are full, as they were for this flight, the plane handles funny—kind of wish-washy, wobbling around slowly. It takes me a wooble or two to get the feel. Then I can dampen it. Just like how it takes a swing or two to get the feel for a different paraglider.

I’ve flown this trip a hundred times from high above. Relative to PPG, it’s outer space. This was way cooler. I basically followed several roads including highway 60. There’s a piece of that road that descends into a canyon, snaking back and forth as it goes down then up. It adds both time and beauty to the road trip but, from this perch, it adds only beauty.

Coming into Phoenix was fascinating. I’ve seen the Superstition mountains from a PPG many times on the other side. As you can see from the pictures at right, I got to see them anew from the east side. Its a gorgeous splendor from either perch.

Before departing I had talked with a fellow in Albuquerque who flies a much more capable Bonanza. He can go up to 18000 feet and cruises faster. I suppose it would be nice to have the capability but, for this type of trip, it was far more fun down low. Of course low is relative, I was at 10,500 feet which was usually about 3000 feet about the terrain.

Landing options were more plentiful than I thought they’d be. Staying within glide of the road helped during long portions.

Total flight time: 2:15. After getting to the Enterprise, though, I was too exhausted to do anything and wound up heading back to Chicago. Another one of life’s many adventures that I’m sure will wind up as a highlight. 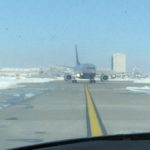 Had to wait 2 minutes after this United departed. Wake Turbulence – glad to oblige. 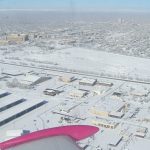 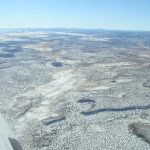 2007 Bonanza flight from ABQ to PHX 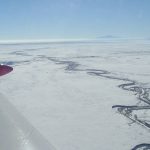 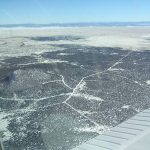 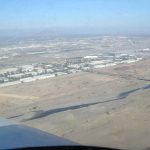 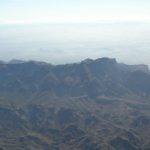 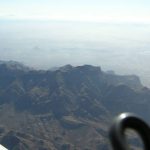 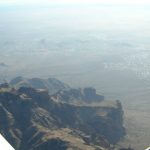 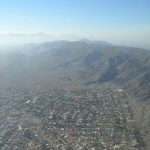 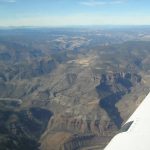 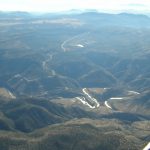 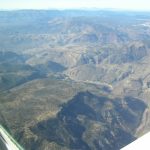 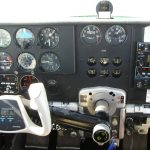 Taxiing out, I had to wait for a  United to depart plus an obligatory 2 minutes for wake turbulence. No problem!    Departing to the east with a left turn over Albuquerque provided a gorgeous view of where I’d been trapped the last two days. The flight provided a different view of Paramotor City. Eric & Elizabeth’s place can be seen on the left and the Daniele’s are on the right. Yup, you gotta know where to look.

The route goes over a well-known Phoenix PPG site at Idaho and highway 60. It’s a gorgeous range on either side.