This motor’s claim to fame is lightweight power. It is of average loudness and vibration but is remarkably lightweight. Early on it was tainted by its connection to Dell Schanze but it is now also available from Rick Hunts and a wide variety other machines. In May 2019 it is likely the most common engine used on higher power paramotors, including tandem rigs.

In my experience it has been easy starting and has sufficiently rapid throttle response on the stock carburetor (Walbro 37). More than anything is that it has great thrust–enough for high elevations and heavy folks, or even tandems. 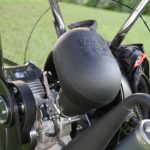 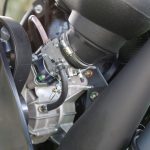 I’ve flown clutched versions of this motor as of 2018 and I always like that option since it’s easier to avoid catching lines unexpectedly. They either have electric start or a flash starter. I still don’t like flash starters. I struggle to get them to work. Maybe it’s my body geometry. Get the electric start.

1. There have been exhaust issues and many iterations of the muffler. Cracks mostly.

2. The pull start system has had been somewhat problematic after between 10 and 20 hours but it is not consistent. Most pilots don’t seem to have the problem but a few have had it recur. Vittorazi has gone through several iterations of solutions and feel they have it licked.

3. Over temping was initially a problem that was solved by the adoption of a special prop that increases cooling right on the head. Vittorazi has also developed a shroud that helps significantly for cooling.