From the July 2015 issue of Cross Country Magazine, updated May 2019

Efficiency is what sets this wing apart. For any pilot, whether competing or cruising, that’s like getting free horsepower. Spend it how you like—on distance, speed, climb rate, or maybe getting away with smaller propulsion—double bonus for not sacrificing other desirable traits .

I’ve had the Doberman long enough to really dial it in, namely setting brake height and tip steering line length. These are set at the factory but it’s almost a given that they’ll need adjustment based on your body build and hang point. I lowered the brake pulley, lengthened the brake lines a commensurate amount but did not lengthen the tip steering. That meant that the tip steering would engage a bit before the main brakes when just pulling down. As you may remember, pulling 2D steering toggles outwards activates ONLY the main (inner 2/3) brakes *IF* it’s set properly. 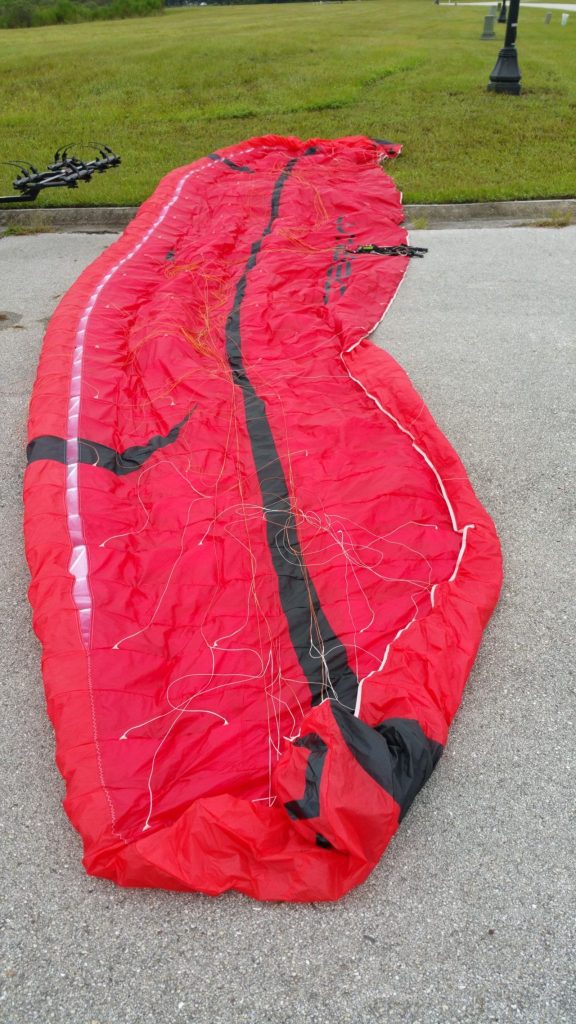 You don’t have to be a competition pilot to appreciate this wing’s capabilities. In my case, it would be good for filming other pilots who fly aggressively, for example, a mission that shares quite a bit with competition.

As an all-out competition wing it should run with the best of them. I did moderately steep maneuvering, including use of full speedbar, and it stayed solid, but I didn’t take on my wake turbulence. That’s something competitors must frequently manage and requires proper use of the tip steering.

All flights were on a Miniplane Top 80 in various conditions including some pretty sporty air and a lot of nearly calm.

A wing like this is made to go fast. Equally important, though, is a wide, easily controlled speed range. Thus the PK system or, Double Effect System (DES) as Niviuk calls it. I call it Speedbar/Trimmer Interconnect (STI).

Connect the STI before launch by first setting trimmers to slow then linking its Brummel hooks on each riser. Let the trimmers out and the STI is armed—you have full speed range at your feet. Pushing the bar out activates the speed system while also letting trim out. Setting the trimmers slow in flight is just like disconnecting the STI—you still have normal speedbar use. Letting the trimmers out again, though, will require two hands since there’s no tension on the trimmer strap.

In general flying I kept up easily with subject pilots. When filming it’s especially nice to control speed without moving your hands or helmetcam wielding head. STI is brilliant for this.

One important trait of fast wings is how they handle full speed in turbulence, especially with brake input. The Doberman has 2D steering which means that your hand will stay on the brake toggle even when you just want tip steering. As mentioned above, I made it so pulling a brake toggle first engages the tip steering first. Pulling more engages the main brakes, too. Pulling only inward (no further downward) would pull more tip steer withOUT engaging main brake. This is great but must be remembered while in the throes of speedbar-maxed stick kicking. Be careful and practice this up high because a fold at speed will quickly cause wrapped-up bank.

Here are the results of multiple speed runs on various days. Mostly the density altitude during these tests was about 1000′ (300 meters). I determined wind direction by zeroing out sideways drift then did upwind and downwind runs to cancel out winds. Trimmed slow it was 25 mph, trimmed fast it was 30 mph, trimmed fast and on full bar it was 38-39 mph. Initially it was hard for me to get full speedbar engagement (speed system pulleys touching each other) but, forcing it gave me that last little bit. Weight has a huge effect on speed. I’m 145 pounds with a 60 pound motor for a clip in weight of 205 lbs (93 Kg) and a wing loading of just over 11 lbs/m² (5 Kg/m²).

2019 update. I’ve now owned this wing for several years and have more to say about NO wind launches. There’s a huge difference between honest-to-goodness calm wind and a half mph of headwind. After many zero-winders I can say it’s one area where this wing does not handle well. This observation has changed how I do reviews. Namely, If I don’t get to have several whacks at truly zero wind launching, I won’t say it launches well in that condition (as I did on the original review). The ugly no-winders actually did work but the wing kind of curls up before filling out, spreading out, and behaving in a wingly fashion.

Setting the trimmers half fast let it come up nicely with no unusual tendency to over shoot or hang back. Most were with the PK system on which meant the trimmers are effectively near their slowest setting. I still didn’t notice any problems. There’s drone video of a no-wind launch from a lousy layout. While getting it dialed in I was landing repeatedly, letting the wing fall behind, making my adjustments then relaunching without resetting. It was messy but worked every time. (YouTube “Drone on Niviuk Doberman”)

It looks like a fairly typical three line setup with split A’s until you get to this lightweight miniriser. It supports a few D lines going to just the middle aft surface. I asked Shane Denherder, the importer, who said they call it a 3 ½ line glider. That mini riser articulates with speedbar and trimmer application through a pulley as you can see in the illustrations.

Unsheathed lines cut drag at some expense in easier tangling if you’re not careful about folding. The leading edge rods deserve care but a loose stuff should be no problem.

This is where the wing stands out, where it’s generational leap is most apparent, and probably one of the main attributes that makes upgrading worth the cost.

Efficiency may not seem as important for motoring but its equivalent to getting free thrust. The Doberman, like a few others in this class, have invoked two primary tools in their quest to conquer drag, a cleaner airfoil shape and thinner lines.

It uses a “shark nose” looking leading edge design and rod stiffeners to hold the shape. How much that helps is beyond me but the wing is obviously slippery—I could fly level, at the same speed as my two-generations older Viper 1 with 500-700 rpm less power. Free thrust.

On small, fast, reflex wings, when fully accelerated (trim out, full bar), it’s common for me to be at full power and still descending slightly. All that speed creates enormous drag that’s asking a lot of my little 80 cc thruster. Those thin, unsheathed lines really help, especially given that drag quadruples when speed doubles. So combining a well-designed airfoil shape with thin lines makes the wing much cleaner, leaving more thrust for speed and climb. Air is sensitive—the Doberman treats it well.

Comparing it to my older Viper was a good comparison. That wing, hustling along at full speed with my Top 80 on full grunt leaves me sinking slightly—maybe a hundred feet per minute (about 0.5 m/s). Mind you, it’s also a bit faster than the Doberman. If I slow the Viper back a hair, to the same speed as the Doberman, I’m still flying level or slightly descending. On the Doberman I could climb at this speed.

It has that small-wing roll rate many paramotor pilots love. Overall, the Doberman has good, predictable, handling that immediately felt natural. It’s not super light—you have to pull with average force its nimble result was good. I suspect that, in a well controlled, blindfold study, I would struggle to tell the difference between handling on this and my Viper.

2D steering is just like putting tip steering toggles in your hands and flying around. There’s good and bad with this. It’s good that you never have to remember to grab your tip toggles, they’re tied to the brake toggle. The bad is that you don’t get to steer ONLY with the tip toggles as easily. You can, of course, simply pull on the tip steering lines themselves that go from the brakes, and that worked brilliantly in practice. It’s what I did while cruising around at fast trim.

As mentioned, I adjusted the brakes a bit so the first couple inches of pull engaged only the tips. That way, if I was going full speed (its maximum reflex) and thoughtlessly pulled the handles a bit, I would NOT deflect any main brake.

The manual actually has no caution against going full speed and using brakes but I have yet to meet a reflex wing that likes doing so in turbulence. So I don’t. For one thing, any ugliness that happens while fully accelerated will be really ugly. So when I was on full bar and fast trim, which was anytime at full bar with the PK system hooked up, I would only use the tip steering. Just wanted to keep the Doberman happy—didn’t want to get bit.

Tip steering is especially effective while accelerated but also works nicely going slow. Remember that, if you’re using the brake toggles, you’ll probably also get some main brake since the brake lines go through pulleys. If you want to insure ONLY tip steering, use the tip steering with its lines.

What If I Don’t Compete?

Do you like good handling? Do you like a good speed range? Good economy? Just because it’s called a pylon racing wing doesn’t make it unsuitable for general flying. It’s got a pretty high aspect ratio so, if it does fold up, you’ll want to be on your A game. Plus, these wings are a a bit more susceptible to spin so it won’t react well to heavy handedness. The only time I’ve seen that come into play is while trying too hard on a spot landing. If you’re high and pull the guts out of it trying to steepen glide, well, it’s gonna get annoyed. It may spin. Don’t do that.

In other words, if these traits are appealing and you don’t mind some complexity, a tiny bit more running on launch, and are comfortable with responsive handling, then you’ll love it.

If you’re thinking about competition then this is right up your ally. As always, treat it with respect and it will return the favor.