This was my first wing. It was intended for soaring and, as such, served yeoman duty. The fact that it was difficult to inflate in no wind only meant something when I had to demonstrate forward launches for my USHPA P2 rating and then when I added a motor. I had an absolute blast flying it until I flew the Silex. Then I realized what I was missing. 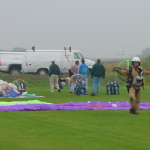 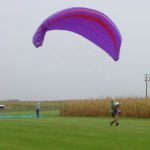 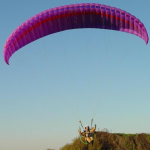 Handling: It’s a bit sluggish and speed is average. The wing is heavily coated which is partly why it inflates harder and has good longevity of the main fabric. Unfortunately, the spanwise red colored stripe didn’t do so well. It failed a porosity test after a about 200 hours while the rest of the wing did fine.

Inflation: Sucks. I’m sorry but this is the worst inflating wing I’ve had to deal with. It was fine in the mountains and stronger conditions but was a challenge in still air on flat ground. Even after I’d gained experience I struggled with this. In fact, I keep it around to remind myself how far we’ve come. On a scale where 1 is the hardest and 10 is the easiest inflating wings, this is the defining difficult 1. I know there are others that are worse but they do no more than tie this one.

It was more difficult to inflate than the UP Vision which was the only other wing I got to fly in the beginning.

2019 update: the Power Atlas has since taken over as paramotoring’s worst inflating wing.

Efficiency: Glide is pretty good, probably about 7:1. It has no trimmers and the speedbar is moderately effective.

Speed (5): Average but, without trimmers, you have to have the speedbar hooked up to go fast.

Construction: It’s very well built but, in my opinion, has a major flaw: the lines are sewn into the fabric. That means you cannot economically replace the lines after the wing gets some age on it. Most wings have loops sewn in where the lines attach to make the lines easy to replace. That is by far the preferred method. When I was told that one of my upper lines failed a strength test, it was basically curtains for the wing. There must be some small performance gain using this method but it certainly isn’t worth the hassle.

The fabric is heavy which accounts for some of its inflation woes. When I sent it in for a porosity test the purple fabric did well and the red striped fabric failed.

Certification & Safety: It’s a DHV 1 from 1998 and has very benign collapse and recovery handling. During a SIV clinic, however, it did not recover on its own during a frontal collapse. Having been told it should recover on its own, I wanted to see if it would. The instructor was telling me on the radio to let up on the A’s and I had already done so. She stayed front tucked until I popped in some brakes. Unusual.

During a B-line stall she horseshoed (tips came together). I’m told that was likely because I pulled too far and I probably did.

Overall: For soaring in the mountains this wing did yoeman duty but, for motoring, it’s far from ideal. Mostly because it’s so hard to inflate.