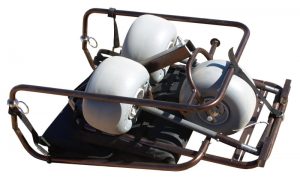 Leon Wacker of Paracruiser has been building machines for others for years along with offering a variety of packages through his own company. He is a tinkerer, too, and enjoys coming up with clever solutions to common problems. In this case, the problem of an easily transported paratrike. The Hybrid Cruiser I flew was configured as a solo unit but doubled as a wheeled tandem (see legality here). These ARE flown tandem in Mexico without problem although they’re not strictly legal there, either. But it’s a wonderful solo machine, too.

Portability is what sets this machine apart–it could rightfully be called a “transformer” since it more folds up than it does come apart. Very handy. It’s probably slightly heavier than others because of this feature but small size makes that extra weight seem far more manageable. It also has quick release prop hardware, something that I’ve only seen from Leon. The whole unit fits in a stout bag, you don’t even need a truck to haul it.

My flight was at Mo’s 1000 foot elevation “Motown” on a 70 degree with 3-level bumps. I weighed 130 pounds and flew it on my 18 meter Pluto which sucked up a lot of power being so small.

Weight: Did not weigh but it was probably a bit heavier than similar carts due to somewhat beefier build and the various folding mechanisms.

Harness & Suspension: Uses a fixed seat that is very low to the ground with just a lap belt. The risers go through guides like on TrikeBuggies. 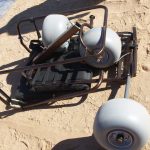 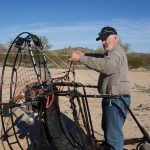 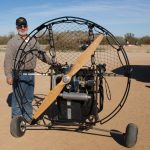 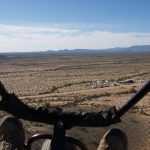 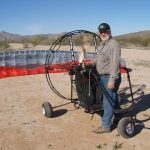 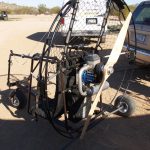 Starting (-): Leon pull started it after several pulls and it idled nicely. The handle seemed conveniently located and it was easy to avoid being put in a vulnerable position with respect to the prop.

Ground Handling & Kiting (-): It was quite tip-resistant for a trike due to the wide wheel base and low CG. I didn’t push it but I did do some ground steering with the wing overhead just for grins.

Launch (-): I followed Leon’s instruction on launch technique which was a little different. Lines go in line holders as usual and I used its A-assists to see how well they work. The motor is level with the craft so it does blow the wing. But with Leon’s technique that had no effect. He started it up, let the wing billow some, which reduced the motor’s push. I got in, belted up, and throttled up. Mr. Pluto dutifully came above the prop wash and the cart started moving. Everything was standard from there. There is a mirror to see the wing although I only used it in flight. It’s also good for seeing how cool you look flying the thing.

Climbout (-): I only went to full power very briefly because it was a new engine but the climbout was around 300 fpm when I did so. That’s respectable given my small wing.

Flight (-): It’s like a go-cart racing seat, how can you go wrong? There’s the usual amount of wobbling around in turbulence that carts are known for. Throttle response was good and I didn’t notice anything untoward.

Weight Shift (-) It’s a cart. You may get an inch or two of travel but the contortions won’t be worth the effort.

Torque (-): This was well managed — I didn’t notice anything more than usual.

Thrust (-): Probably about 160 pounds of thrust. Although I’m a pretty scrawny payload, I was flying a smallish wing (18) and it handled it quite nicely. I went to full power once and had probably 300 fpm climb rate.

Endurance (-): You’ll need to empty your bladder before needing to fill this tank. The 313 is pretty thirsty but with wheels there’s no penalty for taking up to 5 gallons.

Safety (-): It could use a four point harness but that’s easily added. The reason being that, in case of a flip, it would be good to have the pilot restrained against the seat. That would put it’s nice cage to better use. There is good pilot protection above and to the side — if you start to flip and manage to keep your hands and feet inside (feet on the axle) you should come away unscathed. On a trike there is much less concern about the prop. Nothing stood out that made me think it would have any undue safety concerns.

Construction (-): It seemed very well built with good welds and quality components. The folding mechanism seemed solid enough although you’ll want to do it as described in the directions without forcing anything that doesn’t want to go easily.

Reparability (-): Everything is very accessible and parts are readily available.

Transport (-): This is where it really shines. You can easily fold it up to fit in the back of a pickup truck.  Very clever here.

Overall: If you want wheels without a trailer, this is a great selection.

Transport (-): Again, this is a strong point. It fits into basically a carrying bag. Take it out, unfold it and go.

Cost: Leon has some of the most fair pricing you’ll find but check out www.Paracruiser.com.

Overall: For someone who has to regularly transport their wheels via van or truck, this is an awesome solution.