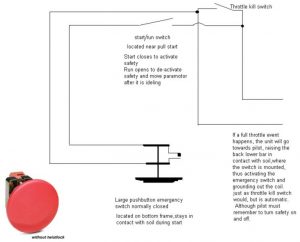 Here is an idea for reducing the possibility of a motor leaping forward and into an unsuspecting pilot. It incorporates two frame-mounted switches. One for the pilot to engage the system and another squat switch that attaches to the paramotor’s rear bottom frame in such a way so that its depressed with the motor sitting level.

The pilot puts the Start/Run switch in “Start” which activates the emergency cut-off feature. If the motor leans forward, as in an unexpected power up, the squat switch would release and prevent the motor from starting.

It does require the pilot to remember setting the start/run switch.

Paramotor pilot Christian has got something working as a simple version of SafeStart. He used an electronic kit and modified it to short the ignition if the voltage of the coil exceeds a given value. It then holds the relay closed for around 5 seconds.

Switch is available here. It is powered by a 9v battery but when the circuitry is at rest it draws very little current, allowing the battery to last a long time without having the need for an on switch. There is, unfortunately, no indication as to whether or not it’s working. If the battery is dead, there is no protection.

He’s planning to have a switch in the harness buckle to bypass the cuircuit when the motor is being worn. The device has been successfully tested but Christian is looking for ways for attaching it to the harness. If you have any thoughts or would like to contact Christian, send your request to us here with “SafeStart” in the title.

Starting a paramotor without it being on your back is the most dangerous time. The yet-to-be-implemented SafeStart seems like the best approach to passively (no pilot action is required) prevent a prop-strike injury. But here are are some other good ideas for improving a pilot’s odds during start.

Robin Rumbolt has suggested a system requiring no electronics (besides a switch) and off-the-shelf products. This will only reduce the injury, not prevent it since it’s still possible for the prop’s momentum to carry it into your fragile flanges.

The treadmill shutoff idea would have the pilot put a lanyard around his left hand where he grips the motor. If that hand moved off the grip, it pulls the lanyard, shutting off the motor.

Thread a small diameter steel cable around the cage, though the netting, in about the middle. Anchor one end. Connect the other end to a spring loaded, normally open switch that is connected across the kill switch. Use a small turnbuckle to adjust the tension.

If the cage is pulled backwards due to line contact, no problem. The line gets a little slacker.

If a body part goes into the netting it will pull on the threaded line and cause the switch to close, killing the engine.

To disassemble the cage, just undo the anchored end and remove the cable. It will only take a minute or two to rethread it upon reassembly.

Bob Armond had suggested a large red back-up button for killing the motor. It would only be easily accessible while starting the motor from in front of it.

Jeff’s passive version of this is to use the type of shutoff used on treadmills. The shutoff lanyard is located near where the manufacturer wants the pilot to start the motor from. The pilot puts the lanyard around his hand and starts the motor. If the hand holding the cage moves from its grip, it pulls the lanyard which shuts off the motor