Encounter with a Newbie

This past weekend I had my first opportunity to attend a hot-air balloon festival (Sussex, N.B., Canada) as part of a PPG group. It was a small field, so only the local PPG instructor, Frank Savignac, and pilot friend Raynald Tremblay from from Quebec, made demo flights from the balloon field. All was done under the watchful eye of Transport Canada.

I was a ‘gofer’ and happy to be part of the scene; hang around in front of Frank’s RV and do my best as a PPG ambassador when anyone came by to examine the gear. Someone soon did. The following is an account of that first encounter: 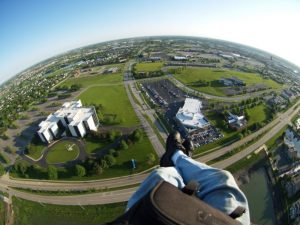 Glen Boy flying: It’s fun to share this amazing way we put the world at our feet

A gentleman, obviously well-rehearsed, stopped by with his cat in a shoulder bag. Fluffy was de-bagged and began assessing the gear. “hmmph – gonna need a better cage before I risk my tail with that foot-launch stuff” she purred.

“Beg pardon, sir, what was that about the Hindenburg?”

If he wanted my attention, he had it. I was awaiting the microwave’s ‘ding’ from inside to announce that my mystery-meat TV Dinner was safe to gag down.

“They’re all crazy, you know! I’ve got an idea that would save thousands of lives!”

Huh? When I heard ‘compos mentis’ being used in the present tense (“they all ARE”, not “they WERE”) I knew this guy had researched his subject.

Terrible thing. Mind you, hydrogen is a very fickle element: apt to pop its cork and revert to water quick as you please, and without a moment’s notice. Are you interested in PPG, by the way?

“They need longer lines – 10,000 feet to cut down the noise. Lots of conspiracy theories, you know? They should listen to my idea.” he replied.

Then there was something about bees: theoretically impossible for them to fly, it seems. About then a bee bumbled by as Fluffy was looking for the Powder Room uncomfortably close to my wing, so I was distracted.

Bees. Bees. Where went my retort about theory? Oh, some Greek geek, Zeno. Impossible to walk across a room: have to first cross half the distance, then half that again, ad infinitum. Zeno hadn’t heard about calculus, and apparently this skeptic hadn’t seen anyone go aloft with a bed-sheet and lawn mower engine.

The decibel issue was never pursued despite my observation that hot-air balloon pilots rarely have to comply with noise-abatement procedures. We agreed to disagree about the advisability of using hydrogen. Helium? (I could sense that Fluffy was seriously considering a trike at this point.)

“Now, your ideas, sir; there’s a Transport Canada official right over there by the green pavilion. You go talk to him.”

It seemed the weight of the world was suddenly lifted off his shoulders; his eyes brightened and came back into focus. I gave a brief and non-technical description of the ‘special parachute’ that makes PPG possible. We had a serious discussion about the practicality of injecting the wing cells with helium immediately prior to launch. Made sense to me – to hell with the wind – the wing’s automatically overhead.

Head held high, a confident bounce in his stride, he set out for the green pavilion with Fluffy re-bagged over his shoulder (hmmph – I think quads are safer than trikes).