This is what started it all.

In December of 2001, while talking to Nick Scholtes, I got an idea. It was winter and I hate the cold. So Chicagoland’s windy chill spawned the appeal for a small RV. My plan: keep the motorhome at a warm destination and equip it with a complete PPG unit. That’s how it earned the aircraft carrier name Enterprise.

Of course the “Star Trek” theme wasn’t far behind the name and, in fact, it sports William Shatner’s signature on the side (he rode in it on the way to some PPG training).

The vehicle was a 1995 Winnebago Rialto. Very compact and equally underpowered (which is endemic of the breed)…it is, however, sufficient and even comfortable at 70 mph on level road.

It sleeps three in relative comfort but they better be friendly! The pull-out shower and Pullman-style sink is minimal but functional although the various tanks don’t lend themselves to long showers.

It has a refrigerator that works most of the time, a stove that’s great for melting the ends of nylon rope and a generator so it can operate autonomously. That’s good because few PPG launch sites have hook-ups.

What a great way to watch the sunset. Right from a beach parking spot.

While parked on a downtown Street in Toronto, Canada, curious passers by wondered about the contraptions 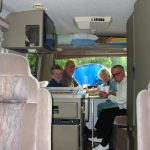 I took my parents and two of their friends for a dinner trip and treated like limo riders.

She fits just about anywhere; a huge advantage such a small ride 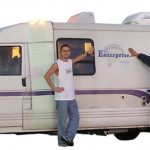 A year later, a rack was added that dramatically improved my carrying capacity. Then a bigger rack was employed when Tim Kaiser starting traveling with me and needed a place for his paramotor. While the enterprise is being stored, the paramotor fits inside mostly assembled with only the re-drive having to be removed and its arms slid inwards. While on the road the paramotor lives on the cargo carrier in back allowing full use of the limited living space.

This is the best looking of the two but alas, you spend more time on the inside enjoying the room than on the outside admiring its looks.

Enterprise “A” Moves On

After 35,000 miles, hundreds of flights, dozens of flying events and sites throughout North America, the paramotorhome “Enterprise” has been sold. Enterprise B has been commissioned, outfitted, and is exploring nicely.

It was sad, in many ways, to see the original go away. William Shatner had ridden in it it and even autographed the entrance during video production and PPG instruction.

It has shown up in three paragliding magazines (Powered Sport Flying, Hang Gliding & Paragliding, and Paraglider) and is featured in PPG’s best-selling video “Risk & Reward.“

It has served as a “launch and landing” deck for quite a few experienced pilots while parked at various beach sites. Much of the PPG Bible contents were done while riding in the back thanks to those who so graciously took the helm (Tim Kaiser, Steve Tustison and others) whilst shuttling about the countryside.

The original mission, to let me travel around the country for two years has completed and now I’ll be moving to the “Enterprise II,” a larger, less nimble but more comfortable BT Cruiser.

It is incredibly maneuverable, gets great gas mileage (unless you’re sucking paramotor fuel out of it), is quite comfortable for one or two and can park almost anywhere a car can. It spent a spell parallel parked in downtown Niagara falls while I roller bladed across the Friendship bridge to Canada.

In 2003 it got some cosmetic hail damage while returning from the Albuquerque PPG Camping trip. That was quite a story on its own.

Here were the particulars: