The 21′ Rialta (Enterprise A) was a bit too small, the 28′ BT Cruiser (Enterprise B) was too big, and the 24′ Winnebago View was just right. These are really working vehicles but there’s nothing wrong with enjoying the work.

The overhang meant we could put two extra sleepers up there if necessary, but more importantly, could store our wings and bulky stuff there. Perfect. It still had a separate bed that always remained a bed–good for combat naps–and a small but functional bathroom.

When we moved to FL and did a huge remodel to the house there we took this for a month’s long tour of the U.S. Northeast and Canada. What a blast. It provided the platform used to create much of the Master Powered Paragliding series and “Airspace for Ultralights” while getting us to the filming locations.

This is our favorite so far in spite of some issues (below). The amount and division of space is perfect for two people who get along REALLY well. Putting the slide out makes it much better.

Driving it is wonderful. There’s plenty of power, even in the mountains, and enough storage underneath.

It’s a 2013 Winnebago View based on Mercedes’ popular Sprinter Chassis. Ride is nice if a bit rocky, and mileage is awesome. But it’s diesel after the rules changed, mandating the use of Diesel Exhaust Fluid, which is for pollution control. I won’t complain since we all love clean air, but it’s a complicated system that offers more points of failure.

It has a tiny engine ramped up to the necessary horsepower through magic dust. Modern magic dust comes from technology and its bevy of sensors, computers, special electronics, and a turbocharger. Like most similar modern vehicles, it has “limp home” mode, where if it detects certain problems it limits horsepower. We’ve had that happen several times.

Limp Home Mode sucks. The first time it happened, Tim was driving, and it wouldn’t go over about 30 mph. He was only a few miles from home but had to get it towed to the dealership in Tampa (an hour away). Uggh. It was a wheel sensor.

The next time it happened we were going to the Grand Canyon. Again, 30 mph on level terrain and less going up even the slightest incline. We made it to a campground with shuttle service to the canyon and figured we’d get it towed after a few days of enjoying ourselves.

When it happened again a year later I tried something. It was autoshifting at a low RPM so went to manual and shifted when the RPM peaked. That made a HUGE difference and I was able to get it up to our normal cruise speed of 65 mph, which turned out to be immensely helpful when it went into limp home mode west of Denver on our way to Salt Lake City. There were no Mercedes Sprinter shops until we got to Salt Lake so we drove it all the way, with many camping stops along the way, in limp home mode. And it wasn’t THAT bad using manual shifting. Still, it was nice to get it fixed. Turns out the DEF heater was FUBAR.

Fingers crossed, she has covered a lot of miles since that episode in 2018 without problems. 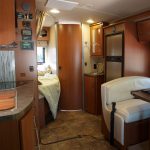 Inside with the slide out

Arriving for another adventure aboard Enterprise C 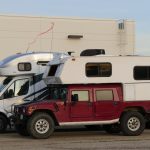 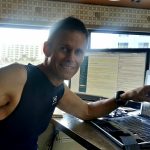 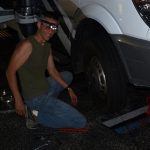 Setting up to watch a rocket launch from Enterprise C 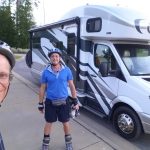 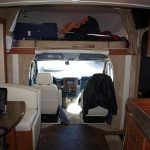 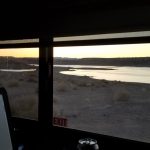 Looking out at sunrise through Enterprise C’s dirty windows 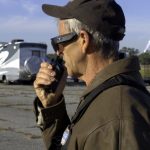 Eric Dufour teaching with Enterprise C in the background

Captain Kaiser at the helm 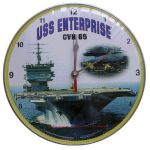