Notes from users, observers and/or manufacturers about potentially unsafe conditions

Paramotors, wings, harnesses, risers, helmets and other gear are subject to failure. This section is an effort to share knowledge of known maladies that could impair flight safety. Also, popular equipment will have more issues so it doesn’t mean a particular brand less safe just because there are more reports on it.

If you’ve experienced or observed an equipment problem, please send it to contact with “footflyer” in the subject field. These may also be reported from information gleaned elsewhere such as personal observations, newsgroups and media reports. One report of a problem is not necessarily enough to warrant an alert.

Certain Sup Air buckles, mostly on chest straps, have a protrusion that can cause rapid war of the using strap. If these are on a leg loop this is even more critical although both leg loops would have to fail before it would be catastrophic. Here is the Sup’Air direct PDF link.Here is a local copy from Aug 29 that MAY be out of date.

A pilot has reported a broken rod inside of at least one fuel filters that can block the flow of gasoline enough to cause engine failure. The video has details.

2011-June-06, Thanks to Ken Morrison for bringing this to pilot’s attention

There have been at least two failures on at least one machine of the Tillitson carburetor side throttle linkage used on MZ313 engines resulting in the motor going to idle.  It is difficult to inspect so Ken, the reporting pilot, recommends replacing the arm every 30 to 50 hours. He reported two failures of this piece on his 2005 Blackhawk 313 after 50 hours each time. He suggests keeping it well lubed with white Lithium grease (or similar) which may prevent the wear.

According to the Ken, he fixed it by (micro) drilling and tapping the brass barrel swivel and putting a very small short screw with a good head through the throttle arm and into the swivel. He then added thread locker while leaving enough slack for it to swivel on the arm. Ken is willing to offer advice to any pilots with a question regarding this problem.

A recent incident points to the value of wearing a helmet, especially on low-rake paramotors. In an effort to move the engine forward some manufacturers reduce the cage rake — how angled back the radial arms are. That puts the prop closer to the pilots head.

In a fall with forward motion, especially on motors with protruding structure at mid-frame (Walkerjet, Flattop), there is a tendency to drive the pilots head into the ground and the cage/prop forward. In the pictured case, the prop flexed into the cage and hit the pilots (fortunately) helmeted head. It’s good reason for a helmet. Photo by Marty Hathaway, click to open larger version.

There has been an incident where a pilot fell and the propeller sliced into the gas tank causing a fireball. Details here. MANY machines are subject to this risk!

If your prop tip arc is less than about 6″ from the gas tank then you might be at risk for this type of accident. We suggest either changing the tank to improve clearance or adding protection to prevent puncture in case of accident. Fire is extremely rare but preventing is equally easy. 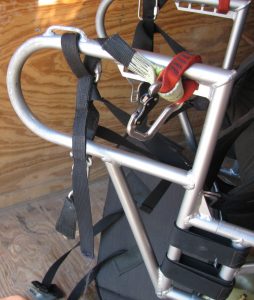 There have been numerous reports of harness wear and one complete failure of a leg strap on a newer Flattop. The failure happened during moderate wingovers on one side which cause the pilot to go into a severe weight shift. Also there have been several reports of chafing lower (leg) harness straps against the seatboard, both on a newer harness. According to one pilot who reported it, the manufacturer blamed it on “too many butt landings.”

Immediate inspection is strongly recommended as this is an potentially critical failure. If any wear is found, either send the harness back or have it repaired by a shop that is familiar with paraglider or parachute harness designs.

We have been notified recently about 2 cases where the accelerator pulley on the paramotor wing’s riser (Force) damaged the pulley retaining webbing due to having sharp edges of the slot not properly blunted. These remained razor sharp, gradually cutting through the webbing.

It’s easy to cure if caught early: file down the raised edge.

Kudos to Apco for issuing this safety bulletin. Here’s hoping all manufacturers are willing to point out defects as soon as they become aware of them. Apco makes quality products but sometimes something gets through. It happens to all manufactured goods but not all are willing to issue such bulletins.

One high-time pilot experienced a line burn from this exact scenario and was saved because the line broke before cutting his heck open. He acknowledged that , had the line not broken it could have been dramatically worse.

Such bars, inherent in a few some designs, are easily added after the fact on nearly all machines.

Whether or not you have good neck protection, the problem is abated by having an easy-to-reach kill switch, in good working order, and be extremely quick to use it!

This style of machine is most at risk.

This style has middling risk because frame and harness parts provide some protection by virtue of giving the lines something snag on besides the pilot’s neck. A line could still cause injury if harness webbing is the only protection although it’s better by virtue of being attached to an over-arm frame part.

This style of machine has the least risk for neck-line injury. Lines would be more likely to run up the frame instead of snagging the pilot’s neck. Machines where the pilot’s arms are below a metal frame part are best.

Machine 1 (far left) has the most protection, followed by 4 (far right). Machines 2 and 3 have the least protection from this particular issue.

Agama Straps May Be Reversed

It has been discovered that 2 Agama “Y” Velcro straps have been found that do not stick together. If the installation instructions are followed correctly this fault will be noticed before it becomes a serious problem. Please insure that you secure the Agama to the paramotor frame with Tie-Wraps if a Velcro is found to not stick together firmly.

The failure of the 2 Velcro hook & loop straps appear to be caused by the “loop” side not being fully developed during the manufacturing process resulting in a non-sticking of the “Y” when closure is attempted. Again – this error should be noticed during installation by the customer – and has been to date.

Make sure that the Agama is fastened firmly to the paramotor frame before use!

If you have any question or comments please contact Paul Czarnecki, PlanetPPG at 239 297 7570 (Florida, USA).

During inspection of some Gin Boomerang Sports with 100+ of hours of use, it was confirmed that some gliders have lines that have changed length and are no longer within the 1-2 cm tolerances. Some gliders with 100 hours+, experienced shrinkage in the middle lines constructed of “LIROS DC 120.” The changes were seen mainly on the D and brake lines.

This line shrinkage can be easily detected during the normal line length check as part of the required 100 hours or 1 year inspection.

As a precaution, Gin has decided to offer replacement middle and upper line sets, free of charge, to all owners of Boomerang Sports and Yeti 08s that are fitted with LIROS DC 120 and DC 60. Please take time to inform any and all Boomerang Sport and Yeti pilots about this notice.

Broken Carabiner found by pilot at Point of the Mountain, courtesy Paul Lundquist

Paul Lundquist shared this picture taken by a pilot after he landed at Point of the Mountain. After unclipping from the wing, the pilot’s carabiner “crumbled in his hands.” Such a failure, had it happened in flight would have been catastrophic and would almost certainly be fatal.

Strength of Aluminum carabiners reduce dramatically if over stressed or scratched. They can be overstressed if flown in the open position. They should be inspected closely before flight and some instructors recommend replacement on a periodic basis such as 100 hours.

Ken Johnston, Green Country PPG, shares that the new Tiny Tach Commercial model may be causing problems with paramotor kill switches. It has been confirmed on 3 separate paramotors using the Black Devil 172.

If too many wraps are made around the spark plug wire (using the red antenna wire), the kill switch will cease to function. The solution is to use the minimum wraps necessary to get a good rpm reading, often 2 will work. Then test the kill switch at several different rpm levels to insure its proper function.

It’s possible that other engines could be affected so check your kill switch after installing this tachometer. Check it at various RPM levels.

During launch, a pilot’s brake line broke where it went through the pulley on a high-time Spice 22 that had not been inspected in two years. A closer look revealed that the pulley had frozen in place so the brake line was sliding over it instead of rolling. That chafed the line until it failed with a moderately strong pull. This could be a very serious failure if it happens when you need to execute a turn and the brake line fails.

The pulleys used on these wings are common across many brands so we recommend the following regardless of make:

1. Immediately check your pulleys for freedom of movement.

2. Inspect your brake lines for wear in the pulley area regardless of pulley condition. Replace any brake line that shows wear.

3. If your glider has not been inspected in the last two years or it has been flown more than 100 hours since the last inspection, it would be advisable to get it professionally inspected.

We have received reports of an apparently bad batch of MAH carbon fiber props props. Cracks near the blade root were found after about 2 to 8 hours of flight time.

2008-01-18 The manufacturer explained that they have corrected the problem and have replaced the defective units under warranty. This was a limited to only certain 48″ props used on Fresh Breeze motors.

A pilot reports that, during climb, his harness detached from the right underarm J-bar causing the motor to twist. Thrust was reduced due the twist and climb reduced. He also reported that his right side initially dropped.

According to the manufacturer, this can result primarily when the J-bar arm is incorrectly installed in the pocket. When properly installed, the stress of the attachment is born by the horizontal webbing. Inspect your connection to insure that it is not being pulled apart at the seams.

Paratoys offered this: “Please insure if your harness is removed from the J bars that were installed  in the factory that it is placed back into the proper slit, Not the Pocket on the harness strap.”

Liftweb integrity (its primary support function) was never in jeopardy but the startle factor and twisting make this important to prevent. We recommend inspecting the stitching and, if worn, having the harness repaired before further flight. Use a parachute rigger or paraglider repair shop that works on harnesses. Many shoe repair shops can due the heavy webbing work required but a parachute rigger will know better what’s needed.

If it happens in flight on any machine, weight shift as much as possible opposite the lean, use minimum power and return for a landing. Know that the structural integrity is still sound.

The pilot who reported this handled it well and, although barely missing power lines in a restricted field, returned safely.

Simonini Motors (on Fresh Breeze & others) Through July 2007

New motors incorporate a different design that reduces or eliminates this problem. Contact your dealer for a retrofit of that system if desired.