I’ve got lots to test, too, with the Miniplane having arrived home and other things.

I’m soon to venture to my first ever trip to Europe. Hopefully they won’t send me back early. One intriguing plan includes soaring the Alps, a place that most consider the birth of paragliding. I have some trepidation, for sure, they’re big mountains with some pretty active air. Consequently, I’m not taking the Spice, rather I’ll be flying the Mistral. So this morning that’s what I flew.

Being beautiful and calm was a treat, but I had a lot to accomplish. Missions were:

1. Try out the slippery tubing for forward launching the Miniplane (see review here). It worked splendidly and the launch was perfect. I landed in a field and did another one with the same results. First observation is that the tubing needs to come up higher around the hoop. Second observation is that I can now see why it’s a bit more difficult to forward launch low hook-in machines. Although successful, I can see that the risers spend more time going around the rim and the wing did seem to come up slower as a result. Not much different, mind you, but in a marginal situation I can see where a newer pilot may struggle a bit more than with a higher hook-in.

2. More flying and weight shifting reinforced that this is the berries. As you’ll see in the pictures, my hands are down in the perfect position. Not too low that they excessively limit brake authority (no wraps) but down in a more comfortable position than high hook-ins. And it does not tilt forward on launch.

This thing is really a dream to fly. The weight shift is effective, loose and unobtrusive. I still wouldn’t recommend it for newer pilots. They may struggle with the launch and may not like the left/right busyness in bumps.

3. Try no-wind reverse. It was probably about 1 mph and it worked quite well, even on the Mistral which doesn’t come up quite as fast as the Spice. I started by blowing some air over the wing—just above idle though—then brought her up and launched. Not having the prop spin while you’re backing up is nice. 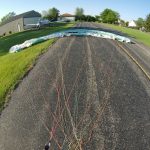 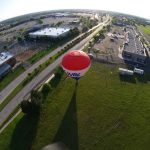 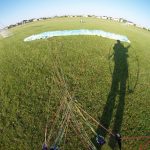 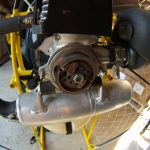 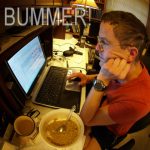 1) Where I launched and landed. 2) Bonus balloon. 3) Where I landed to do the tests and spot landings.
4 & 5) Unhappy clutch. Notice the boxes of PPG Bibles in the background. That’s one of three pallets and that’s still only half the books, the others are at Sport Aviation Publications. 5) Bummed Tim—he wanted to fly.

4. Try some power-off spot landings using the Mistral. The FAI landings went well but I’m trying something new. Something that Eric Dufour is probably the king of: spot landings with minimal run out. Plus, I’m adding one more twist—landing over a 5 foot rope. The quest is to see what it would be like to land in a small fenced area but without the risk of a fence. I’ll admit, it didn’t go well. I clearly need more practice. I could swoop and get it four out of five times. But landing over that fence is tricky. If swooping, you must time it just right over the fence. I’m thinking that the steep approach may be best but be careful, that’s a good way to stall and fall. Practice, practice, practice, careful practice.

5. Run it dry. I haven’t added Gas since I bought the machine and this is my third flight. The first one was only 10 minutes but the second one was at least 30 minutes and the tank started from just over 1/3 full.

I wanted to see how it quit (would it putter?) and whether or not it would suck all the fuel. Then I’d weigh it. Finally, I want to mark the tank in Gallon increments for future reference. This is one miserly mother! When it quit, at least 30 minutes later, it wasted no time, going from a slow climb to silence immediately. One bad thing, though—the prop stopped. Uh oh. Something had obviously gone amiss in the clutch department—that prop should be windmilling. Thankfully, that turned out to be just a pair of clips coming out as I found out later but removing the clutch isn’t just done with a socket. You need a gear puller or do the hack job I did as described at right. Hey, it worked and doesn’t damage anything!

6. See how fast the Mistral was. Spicely has been getting all my attention but I’d be flying the Mistral in Europe. If Alpine bliss was to be found, I better know where to look and getting comfortable with the wing would help. Speed isn’t that great but I didn’t have my accelerator hooked up. I measured 7 and 35 (headwind and tailwind) so its 21 mph unaccelerated. Hey, maybe FootFlyer did a review on this wing? 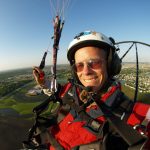 1. A good view of the hand position in flight. This is brake pressure.
2. This is the Mistral. Split A’s, no trimmers, turns kind of sluggish (most would call it “flat”) but has great glide performance for its age.

Overall the flight was a hoot. Shortly after launch it became obvious there was a stronger wind aloft as I needed to crab east to stay over my taxiway. At a few hundred feet, I was crabbing 45°. Later in cruise, I would find the wind to be a perfectly smooth 14 mph. It didn’t get bumpy until the last part.

A fitting return home. Thanks Illinois!