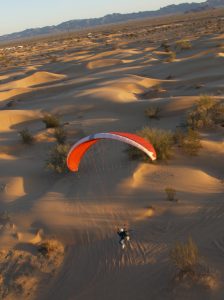 It seems innocuous. We find a nice flying site, maybe not easily visible from the road, and launch into the coolness. This is one of powered paragliding’s great draws–how easily we can just head off from the most unlikely of sites and be independent. But that independence has a dark side–if something happens, we could wind up being immobilized and unable to get help.

A recent accident saw this horrific possibility play out for a pilot launching at an isolated field for a short flight around his local area. Something went bad on launch and he wound up falling hard, maybe just after getting airborne, and breaking his back and pelvis.

The injury left him unable to move or even get to his cell phone which was in his pocket. He laid there for over 7 hours which caused additional injury (sunburn blisters, dehydration) before being discovered and transported to a hospital where he was operated on and put in intensive care.

This is a terrible possibility that we’ve talked about for years but frequently don’t heed. Now it’s happened in about the worst possible way. What a bummer to survive your injuries only to die because you couldn’t get simple life-saving administered.

There have been other accidents where the pilot crashed in a remotish area, was immobilized, but there happened to be a passerby who called for help. The one where a pilot pummeled into pavement after experiencing torque twist on launch comes to mind. We’ve previously thought that having a cell phone with us was sufficient but now we know better. Have the cell phone, but use it to let someone know you’re going flying, where, and when to start worrying if you don’t call them.

The same applies at fly-ins or any other time you could be absent for a while without anybody being aware.

Alex Varv was a proponent of this for years, always offering to take calls whenever one of us would go flying alone and, sure enough, one day his friend didn’t call back. Sadly, that friend had crashed and died but Alex was soon on the hunt. In this case it wouldn’t have mattered but, had the pilot been in a tree somewhere, at least people would have been looking for him.

Another great option is satellite based personal locator beacons or messengers, two different creatures described in the sidebar.

We can still enjoy the remarkable freedom of solo paramotoring but should consider the simple benefit of letting someone know we’re flying and when we’ll be back. They should know to start trying to reach us if they don’t hear from us within 30 minutes or so of our estimated return time–kind of a personally administered flight plan.

These satellite based options give you rescue capability beyond cell phone range. There are two primary types. 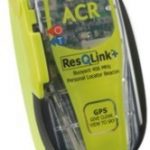 Personal Locator Beacons just broadcast your location to no one in particular using a frequency and coding that lets the receiving agency know who you are (if you’ve registered). The advantage here is that there’s no monthly fee. 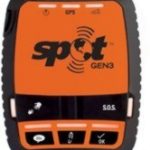 Satellite messengers like this charge a monthly fee to let you send a SOS that includes your GPS coordinates and other messages indicating your condition can be sent, too.

Use these when you need them, of course, but expect to pay a hefty fee after being rescued. Manpower and machines aren’t cheap.