Getting Tandem Certified on Foot and Wheel

After the long process of obtaining an FAA tandem training exemption for USPPA, it seemed appropriate for me become a tandem footlaunch instructor myself.

The first clinic was with our sport’s most prolific, and founding tandem instructors, Eric Dufour. Of course I’ve worked with Eric a lot during production of the Master Series, competing, and just hanging out as friends. He is also who I got my paramotor instructor rating from.

The other pilots in the clinic had already been doing tandems but I was starting from scratch so had do the whole thing–flying both as pilot and as passengers for others to get the requisite five flights and one as a passenger. I flew off 6 of the requisite flights with Tim Kaiser mostly and decided footlaunch tandem in the typical calm winds of my life would be no fun.

Like most things paramotor, the most important skill is wing handling. And handling a big wing is a test for even the best kiters. In strong winds, the enormous pull will guarantee a sliding inflation, and in light winds, forward launches are difficult because the wing pulls back so hard, making it difficult to run hard enough.

In Feb, 2019 I went to another Tandem clinic with Chad Bastian and earned my wheel launch Tandem there using Bubba Peter’s machine. 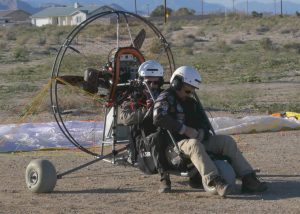 Jeff Goin getting ready for Tandem checkride flights. Bubba Petersoffered use his trike and we served as each other’s passenger.

Before I fly with a student in stronger winds, I’ll check conditions by kiting the wing to insure that I can control it by myself. I’ve been doing this for solo flying for years. While it will be easier to manage with the weight of motor and passenger, Its obviously better to only fly in conditions that are manageable solo—you’ve got more margin of control. If you can’t manage the wing by yourself, it’s probably best not to try flying tandem.

Since Sept of 2008 we could only do footlaunch tandems on wheels. In November of 2018 we got the wheeled limitation removed so we can now teach on wheeled tandems. That’s sooooo much safer!

The USPPA’s exemption doesn’t cost pilots anything for access to it. In fact, a pilot getting the requisite instructor rating, can get a $200 reimbursement for earning the ratings while money lasts.

The exemption works more like the USHPA’s where an instructor first earns the basic rating by successfully completing 5 tandems at a clinic then must go out on his own and fly 24 tandem flights with a USPPA PPG2 or USHPA P2 rated pilot. Its also worded such that the pilot and passenger must support their own weight. That was done to allow instructors, especially smaller ones, to rig up wheels on their motor so they don’t have to carry the full weight of a motor powerful (heavy) enough to fly twice their weight or more.

I’ve seen a number of setups for doing tandems and have now flown with two. Observation and experience points to the U-Bar as the most effective method. Support is through the same type of tandem spreader bars that free flyers use. Here are the ones I’ve seen.

1. Just using tandem spreader bars. My only comment is: don’t.

I realize that’s how it was done for a long time, and indeed its possible but its far, far from ideal. Every highly experienced instructor who does foot launched tandems have echoed the same thought. The problem is that motor thrust pushes on you but not the passenger in front who invariable gets pushed beside you and against the cage, dangerously close to the prop. Plus, there is no way for the passenger to know when you need to move or turn left or right since there’s nothing (or very little) force pushing him left/right.

I’ve only seen this setup once and, although its convenient to hook up, its not as effective at steering the passenger as the U-Bar mentioned next. It is a a mix of convenience and functionality.

3. Tandem spreader bars with a U-Bar. The passenger harness is attached to the U-Bar so that thrust is pushing on his harness in addition to conveying left/right steering desires of the pilot.

Wheels could be added to the paramotor (see diagram above left) and also to the U-Bar bar as long as the passenger and pilot both have to support their own weight during the launch run. Castering wheels would seem like the best solution so the pilot could still move left/right. Otherwise, an off-kilter wing could topple the whole affair.

In the United States, tandem is only allowed for instruction purposes and only for foot launches. If you want to fly wheeled tandems, it requires sport pilot certification. And believe me, the FAA has no desire to change that. We didn’t get our foot-launch exemption until we pulled out the reference to wheeled craft. If you’re an instructor interested in doing tandems, seek out a USPPA tandem instructor who can take you through the program.