A carburetor’s job is to feed the engine a perfect mix of fuel and air as commanded by the pilot. There are two basic types of carburetors: Float bowl and Membrane. About 70% of all paramotors use membrane carbs which are cheap and lightweight. Each type has it’s advantages and drawbacks but this article only addresses Membrane carbs.

Here is a great video on how membrane carbs, and indeed 2-strokes, work.

Air is typically metered using a circular valve called a butterfly valve. As you open the throttle, the butterfly valve opens to allow more airflow. Fuel is sprayed into the incoming airstream in a carefully metered amount determined by a variety of mechanisms in an effort to keep the mixture relatively constant from low airflow to maximum.

2-stroke Motors tend to lean out as they warm up so it’s best to be slightly rich when starting. They need to be richer when cold.

Walbro carbs have a built-in fuel pump, needle & seat controlled by a float diaphragm and a low end needle set. Most carbs also have a high-end needle set and a few have chokes. Paramotors normally use the WB and WG series although there are others out there such as WT, WL, WS, WTL. Fortunately, they share a common tune-up procedure.

It’s helpful to understand what’s going on and what part of the carb is being used at that time. Any one of several functions can affect operation in sometimes strange ways. What could sound like a rich low end needle setting could easily be a float setting on the needle & seat. A stiff diaphragm will make it run rich too. It could also make it run lean. The high end and low end needles interact throughout the entire throttle range. So if you adjust one needle, you will likely need to adjust the other slightly.

Starting from the gas tank, fuel is pumped in through the carb inlet into a little diaphragm pump which is controlled by 2 one-way flapper valves. The fuel then passes through a needle & seat that is controlled by the float diaphragm. The float diaphragm manages how much fuel is available for the rest of the fuel circuit by opening & closing a passage utilizing a small lever attached to the needle. How much pressure it takes to move this needle off of its seat is called pop-off pressure. Less pressure means more fuel goes into the chamber and will enrichen the mixture. If it takes more pressure to pop off its seat then less fuel is available in the chamber ergo a leaner mixture.

Fuel in the float cavity area is waiting for a vacuum signal at the various jets. The lever setting is very critical since it controls the available fuel to the jets. If the lever is too low (or pop-off pressure too high), the engine will run lean, if the lever is too high (or pop-off pressure is too low), the engine will run very rich and will likely flood out at idle. 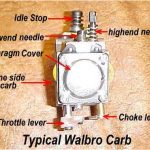 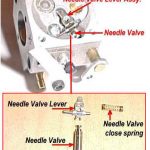 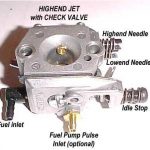 This carb is equipped with a high speed check valve and external fuel pump pulse inlet. 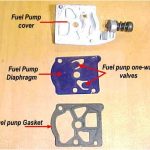 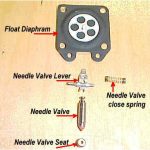 The fuel starts its journey through the pump assembly first.
Then is regulated by the float diaphragm that controls the needle & seat.

History: why so complex?

Float bowl carburetors were, for a long time, the standard method to deliver an engine’s fuel and air. But they require being upright so gravity keeps the float floating and metering.

When designers started putting small gas engines on tools, they needed a way to work in unusual orientations. Viola, the membrane carb. You can hold it in any attitude and it will function.

tech.flygsw.org (now defunct) served as the root and graphics for this article. Details on specific tuning of several carbs can be found on Alex Varv’s site as well.

All of these parts reside in the float cavity area as well as the fuel ready to be fed through the jets as needed. The amount of fuel available in the cavity is regulated by the lever and its relationship to the float diaphragm. So it’s critical that the lever be set properly. Within the cavity, there are distribution holes that are managed by the low end and high end needles. Plus the idle circuit, which is a fixed size.

Another separate fuel circuit provides a small amount of fuel flow into the throat continuously which helps at the lowest throttle settings. At high power this circuit is still injecting fuel but represents a very small percentage of the total flow. This circuit helps keep a correct mixture for acceleration.