Not Again – Engine Failure in Trike

Kermit Week’s “Fantasy of Flight” is not SUPPOSED to be my background!

There I was, enjoying a little cruise about the countryside, visiting many of my local haunts, including a flyby of runway 4 at Kermit Week’s Fantasy of Flight. Just before reaching the intersection of Fantasy’s two runways, I throttled up to climb.  Suddenly the engine RPM increased and thrust decreased. I knew what had happened almost right away—the belt had come loose—and immediately throttled to idle, landing normally before my options worsened.

THIS is why I try to keep landable surface below! Mind you, there ARE moments where she just has to run, but I sure try hard to minimize them.

Landing was soft in the thick grass and after shutting off the engine it was silent. Why is it I always have plans when this sort of thing happens. Uggh. Frequently I’ve been able to find a solution to whatever ailment is eating Ms. Samba but not this time. A quick look revealed that the problem was a broken belt-tensioner bolt. I don’t carry tools and, even if I did, they wouldn’t include a drill and easy-out.

Thanks to the Auburndale police, and to Kermit Weeks for coming out, to let me out of the gated property. We got the trike all packed on the trailer and tied down just as the first raindrops from a good florida gully washer came through. She’s now in the hangar awaiting some care. I’m gonna let her sit for a while. A time-out is in order.

The gallery below highlights the episode. Thanks to Tim for getting pictures at Fantasy. You can see the broken bolt, too. 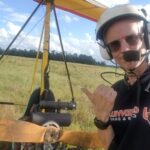 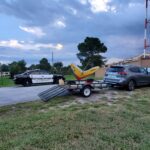 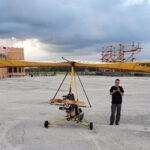 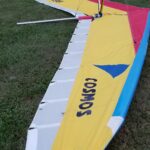 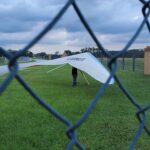 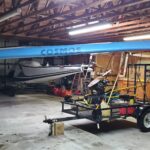