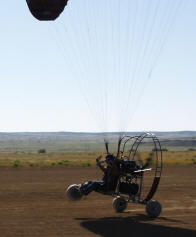 In 2007 I tripled my experience with trikes. The picture at right shows my first foray into high powered PPG trikes, flying Jim Doyle’s Hirth powered behemoth down the runway while keeping the nosewheel aloft. It was flown under a Sting 250 paraglider.

What I’ve discovered is that, if you can competently handle the wing, transitioning to wheels is quite easy. I’ve also learned a lot about the different dynamics of trikes vs quads, line holders, attachment points, wheel choices, frame styles and riser connection methods. After seeing some expert trike pilots through many launches, I’ve discovered that you can recover surprisingly crooked launches with appropriate finesse. I’ve also seen how quickly a new pilot can flip his craft and break an arm. Proper training and student attention to their instructor is just as critical for learning trikes as it is with foot launching.

Something else that has become clear is power. Unless you’re planning to foot launch your unit, thrust is good. Although it can twist pretty good, wheeled craft typically torque less than foot launch because the axis of torque is farther away from the axis of twist. Overall, more power is easier to manage on a trike and more beneficial to launch.

Innovation continues apace and it will show up periodically here when appropriate.

As pointed out in the PPG Bible, the biggest risk on wheels is tipping over during takeoff or landing. Designs should protect the pilot in a rollover such that his head would not impact the ground.

The vast majority of trike injuries come from rollovers where the pilot puts out his hand and it, or the arm, gets broken. That happens regardless of protection because pilots don’t keep their arms in. Obviously if your unit won’t provide proper protection of your head in a rollover there is little choice. Most provide some protection by virtue of requiring a cage hoop that sticks well above the pilots head.

If you have a design that has good protection, rehearse what to do in a rollover: hands in, head down, kill the motor. “tuck, roll and terminate (the motor)” 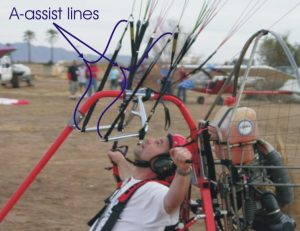 A-helpers (or A-assists) on a Fresh Breeze trike

To make launching easier, A-Helpers (also called A assists) are sometimes used. They are lines that go from a frame part to the A-risers so you don’t need to hold the A’s during launch. As the wing comes overhead, geometry is such that the A-Helpers go slack—perfect since they’re not needed anymore.

Probably 90% of all tandem powered paraglider training is done on wheeled units like the one above, frequently in quad form.

Big power keeps this big powered parachute (above) flying in order to overcome both the heavy weight and inefficient but stable square canopy. These usually have foot steering (to the wing’s trailing edge) although the pilot can reach up and pull the steering lines as well. 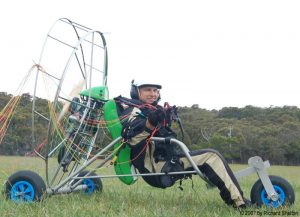 Many paramotors have a trike attachment available as an accessory. They make it easy to go from foot launching to wheel launching with simple mechanical mounts for the paramotor. 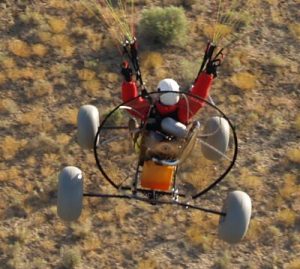 Typical quad from above

Quads increase ground stability but do not eliminate rollovers. For one, they nearly all have steering that moves the whole front axle left/right instead of like cars where each wheel moves left/right. So if one side hits a hole, it can jam the unit into a turn.