It’s easy to dismiss the risk of midair collisions because they’re so rare. But they’re also severe and, tragically, seem to happen to conscientious pilots with the smallest bit of inattention. Flying with others obviously requires extreme vigilance. It’s surprising how few midairs happen at major fly-ins–probably because everybody is paying so much attention. But with just a few pilots aloft our vigilance wanes and the unthinkable becomes more thinkable. History bears this out–we should learn from it. 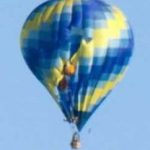 Segment 1 of Roy Beisswenger’s Oct 19, 2010 Powered Sport Flying radio show deals with this mishap. Also, I talked with Wil Jones on his TalkingPPGRadio show. Here is an assessment by Dan Grunloh of EAA’s Light Plane World.

Things are not always as they seem.

This accident had everybody scratching their heads. On the surface it seemed about as likely as a wave runner crashing into a cruise ship. It just made no sense. Plus, the pilot  wasn’t the type who “buzzed” balloons and his instructor characterized him as a conscientious, conservative sort with 40-plus flights who wasn’t into showboating. So what’s up?

The first pictures indeed seemed to show a side-swipe collision of the wing and balloon, like he was buzzing it but just got too close and the wing caught. But how could a wing catch like that? Then I saw this picture, taken seconds before the collision, showing a much different story. The trike pilot was above the balloon, hitting the envelope from near its top. That is indeed what happened. The balloon was climbing and the paratrike pilot was flying essentially level.

The trike went through the fabric, ripping as it went and popped out the other side. The wing followed through, tangling in the balloon envelope as the trike fell down through, ending in the position we see in this picture. Hot air poured out of the gaping hole, depriving the balloon of its lift and causing a descent. Injuries were significant but not life-threatening. It could have been oh so much worse.

This isn’t about blame, it’s about learning what happened so we can prevent it from happening again. That’s what true accident investigation should strive for. Sometimes cause is obvious, like when a hot-dog gets whacked while doing something obviously risky. But other times it’s a conscientious pilot(s) flying mostly in a normal manner when something very unexpected happens. That’s how I see this. And there is usually more than meets the eye, a chain of events, frequently easily broken, that lead to the final outcome.

The balloon pilot had control only of height and obviously can’t maneuver quickly. Much like a cruise ship captain who may see waverunners flitting about but can’t worry about them. The Balloon pilot probably heard the paramotor up there flying but didn’t give it much thought. Nor should he. The analogy stops there, though. This seems more like a sub coming up from below from the trike pilot’s perspective.

I see two likely scenarios but first some data points. The area had been wetter than normal which means more green, especially against the mountains. The balloon was blue and yellow, possibly presenting less contrast if it was backed by a green landscape. To match the landscape’s color I went to Google earth and used the date slider to pick a green-looking image.

1. The trike has a small blind spot in front. At a half-mile, the balloon which could have still been on the ground, might be obscured. If the balloon rose mostly in that blind spot, it might not get the pilots attention as early.

2. It’s possible the balloon’s climb rate, starting at 0 and building to around 500 fpm, would have made the balloon present no visible aspect change and might have stayed basically in the same place against the backdrop. I’ve had this happen with aircraft on collision courses — they’re not moving relative to the background and don’t become visible until they fill up a good portion of the windscreen. Scary moments.

These would be aggravated by a lack of contrast. A red balloon against a green background would obviously catch the pilot’s eye earlier.

So I put together this animation to see what the possibilities were. I didn’t calculate speed but set the PPG trikes speed as constant and ramped up the balloon’s climb slowly as you would expect.

Three scenes are shown. 1) First is from the ground observer’s perspective which makes it look so incredibly avoidable–the pilot is simply heading for the climbing balloon. 2) Next is the pilot’s perspective and that really tells the story. Remember, you KNOW what’s coming. This pilot may have been looking around mostly at his altitude. 3) Pilot’s perspective with a small turn about 10 seconds before. The point of 3 is to suggest a possible solution: when in an area with other craft of similar or less speed (PPG’s PPC’s, Balloons) it might be good practice to do  small turns regularly instead of flying straight and level.

We haven’t heard from the pilot so this is still speculation but lets not just throw him under the bus. When I get information that the parties are willing to share, I’ll add it here.

We can learn from this and hopefully make some concrete actions to reduce risk. Those who are willing to adopt lessons from past mishaps are much less likely to repeat them.

1. Clear turns, as taught, but with emphasis on looking up and down in your turn direciton. This is the normal advice we all learn early on with “look, lean, turn” (paragliders) or “look, shallow, up/down, turn” for paramotors. That is, look in the turn direction, start a very shallow turn (to alert others), look up and down in that direction, then turn.

2. When in an area where there is potentially other similar speed or slower traffic, do periodic turns left and right. It doesn’t take much, maybe 10 degrees every half minute or so.

3. Try to keep track of as many craft in your flying area as possible while following the other guidance.

Here is an animation I created based off data from the two flight trackers.