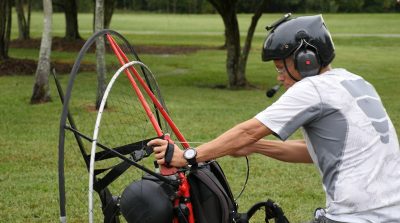 I read this on social media and cringed.

The pilot was doing everything right—his machine was on a rack for starting that wasn’t enough. What happened next was unexpected and terrifying. Either he throttled up or it went to power and it lunged toward him. Instinct probably kicked in and he put out a hand out to protect his head, but that hand went through or against the insufficient netting and got mangled by the prop. He underwent 5 hours of surgery.

We don’t know the extent or permanence of the damage, or how much motion loss he’ll have, but we do know it can be life-changing. What the fluck?

It turns out the paramotor wasn’t secured to the rack. We don’t know how or why, but it sure is an important data point about how we need to go beyond “on your back or on a rack.” If it’s not secured, or if it comes disconnected, or the holder fails, should that be a maiming sentence? The same is true for any method. I use the rope trick occasionally but now rely on starting with the motor choked. I could forget. Ultimately, like so many things, it comes down to discipline and vigilance. This was an experienced pilot with probably well over a 100 flights who made one simple mistake, a mistake that any of us COULD make. Hopefully knowing of this mishap will make me try to have another method in place to prevent prop strikes.

A good practice would be to pull the motor forward hard to make sure it IS secured. We know that now.

The safety ring could help and it’s only $65. I don’t sell it but some paramotor hardware sellers now do, besides the one at the link. Of course, it’s even less if you bend it yourself. Consider adding it. We don’t know whether it would have prevented this but it triples the force required to get a hand to the prop which certainly helps.

According to the person who posted this report, the pilot is done with paramotoring—a sad footnote to a sad situation.

A good exercise is to imagine someone pushing on the prop hub with 100 lbs of force or whatever your machine’s rated thrust is. What would happen? Where you end up? Rehearse reaching for the frame above its thrust line to hold it back while also going for the kill switch. Thinking about it in advance may save the day.

No matter what mitigation we use, vigilance is frequently the only thing between our operation and disaster. Thanks to the pilot’s friend who shared a few details so that we could be reminded, again, what’s at stake.