Here are some things observations of positive developments in paramotor safety. It would be cool for every machine to provide basic protections against the inevitable: falling, unexpected thrusting, and others. Check out A Better Paramotor. Here is a celebration of improvements actually made by manufacturers or individuals. 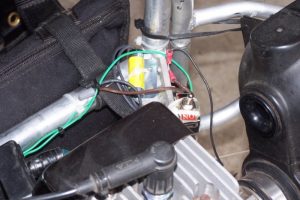 2008-04-05 In an effort to reduce the propeller strike risk associated with starting a paramotor, Tom Scott of OlympicPPG has implemented a safety shutoff switch. The tilt-sensitive (mercury in this case) switch is placed such that any tipping beyond about 25° in any direction will activate the kill circuit and shut off the motor. It protects against a tipping motor during start or if the pilot falls.

A manual toggle switch bypasses the tilt circuit so human action can still defeat it or leave the protection bypassed. It must be bypassed to stand up although he’s considering trying a momentary switch that the pilot pressed to bypass the protection circuit. That would allow the pilot to bend over to pick up the risers, for example.

Tom has one mounted on one of his paramotors and continues to test it. Hopefully, if it proves to be practical, other makers will implement the idea.

2008-04-05 Another step in the right direction of pilot protection is found on the newest Paratoys “Rhino” cage. Very stout netting covers the entire top half of the motor so that it would prevent an open human hand from hitting the prop, even at full rated thrust. The second hoop completely encloses the prop to provide further protection and lessen the chance that lines will get chopped on a biffed launch.

Like nearly all double hoop designs, the area between the inner hoop and outer hoop does not have netting, so pilots must still be careful about reaching back, as always.