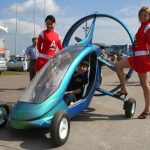 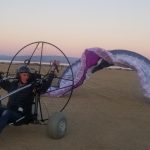 Chad Bastian inflating on a trike at the Salton Sea

What flavors we have to choose from!

I’ve flown most types of wheeled craft but not this one, pictured right. When foot launched, it’s among the stranger craft. When foot luanched, the Airgate articulates such that the pilot launches with the motor upright but then mechanically moves it so he’s reclined in flight. On the trike, it appears it just stays in the reclined configuration. Interesting.

The Russians are coming and what they’re coming up with takes my prize for the coolest looking machine (Scarab above). Now all it needs is heat. Go here for more.

Can you imagine that? An enclosed PPG cart with heat. Then having this much pizazz–northern pilots would slurp them up like ice cream. Put zippered vinyl sides, have the brake toggles go through a hole using pullies and the steering go through booted enclosures. Add an exhaust muff with slipstream forced air heat routed to the enclosure’s windshield for both cabin heat and defrost.

Build me one of those and I’ll plunk down for my first wheeled PPG.