Wheels are great for conquering the still-air launch blues, but what about once you’re airborne? They don’t do much good there and, for some, get in the way.

So Jack Woods decided to do something about it. We don’t have the details but it’s pretty obvious that he has some way to kick off the trike once he gets lifted by the wing. As it turns out, he still has little wheels on the paramotor to make it easier to move it around or tolerate a little butt-skid,

Jack’s son-in-law is pictured with the Walkerjet on his “breakaway trike.”

He says: “We have attached vertical stabilizers to the PPG (they’re connected to the comfort bars which run down to the small wheels) and slotted skids to the trike which are blocked in the front for the PPG frame to sit in.” When you get on the gas the prop pushes against the skids and forces the trike to roll.

Sgt.Tyler is shown with a sweet inflation and was lifted off the trike in less than 100′ feet. It was perfect launch from the Frankfort, Ohio Adena High School grounds for a smooth, zero wind evening flight! We’ve been breaking away since 2006!! 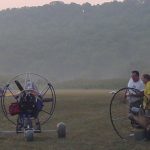 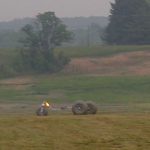