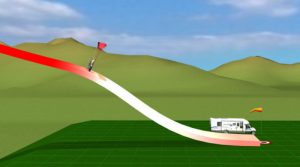 Spot Landing illustration with flight path where red is heavy brake and white is NO brake.

What a useful skill it is to be able to land where you want without power. Pilots of all craft recognize the importance being able to put it down after thrust stops thrusting. We PPGers are lucky in just how small of a place we can alight, even landing on tiny targets like Frisbees. But trying too hard for that has proven extremely dangerous.

Here’s why pilots hurt themselves when trying too hard for an exact landing target.

1. Like nearly all control-related issues in paramotoring, pulling too much brake is the big demon, usually resulting is a spin.

One interesting “twist” on spins is that they can occur when you release a brake. If the glider is already slowed with lots of brake pull, and you let up on one brake, the inside wing slows down a bit. The wing twists above you, causing the inside tip to be moving slower than the outside tip. That might be all it takes.

I’ve had it happen several times while trying a bit too hard. After slowing down on base leg, I was pulling lots of brake and turning right. I let up brake pressure on the left side to increase my right turn and the right tip started to stall. Thankfully I caught it before disaster set in, immediately reducing all brake pressure, but it was close. And it’s possible not to feel anything until its too late. Most of the time an incipient spin will show itself when the inside brake goes just a bit soft. That’s because, as it stalls, the trailing edge deforms downward and rearward.

2. The next big reason for hurting yourself trying for the target is that you’re concentrating so hard on making the spot landing that you forget to flare properly or land in a bank. It’s real easy to get into a high sink rate and not allow enough time for a proper roundout.

3. Another reason is that you’re concentrating so hard on making the spot that you forget about some obstacle and run into it. An easy solution to this is picking spots well clear of obstructions, especially wires. But trees can easily be deadly (and have been), too. Set up your landing target knowing that you’ll forget about your surroundings. And of course, don’t forget about surroundings! Yes, I know, easier said than done.

This was written as much to me as anyone else since I so enjoy doing the many forms of spot landings. But I’ve been nearly bitten from all these causes and hope others will realize what’s at stake. Plus, it serves as a reminder on how quickly we can meet with grief.

Precision flying is a great aspiration, but treat it with equally great respect.