Chapter 6 on flying with wheels, Tandem Setup | More on: Exemption For Wheels, Too?

As of Sept. 2008, the USPPA has a new tandem exemption for training with Foot Launch tandems. As of Nov 2018 they also have one allowing for wheeled tandems.

I applied for this in 2002, using a model based on USHPA’s (then USHGA) but it wasn’t awarded because the existing exemptions covered paramotors. Those exemptions went away Jan 31, 2008 and the new one is now in place.

I worked with the FAA for countless hours and iterations in an effort to get something that was both realistic and useful. We all know that it’s easier and safer to launch a tandem with wheels but that, in the FAA’s thinking, made it a sport pilot machine. Nothing I can do there. 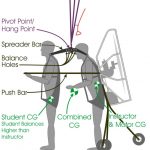 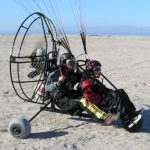 FAA regulators were dead set against approving anything until we made it clear it wouldn’t apply to wheeled craft. They did understand my concern about carrying a motor powerful enough for two, a difficulty that prevents many instructors from participating, so they allowed verbiage that lets the wheels support the motor’s weight as long as the instructor/student support their full weight during launch and landing. That provides a lot of flexibility. No such craft has been built, but it’s not hard to imagine. Even that interpretation has been dealt a blow, though, by their updated interpretation.

In about early 2018 the American Ultralight Association got a wheeled tandem exemption, followed by ASC and I re-applied for ours. It was granted a few months later.

We’ve been given the opportunity to govern our own tandem operations but must do so carefully. If we want to maintain it as a training tool then we must honor its purpose as such. And it is an extraordinarily helpful training tool. To realistically be able to get a student at the hands of a paraglider to figure out its pendular weirdness is huge–life saving. After watching a lot of training while writing the Instructor book, I’ve gained a new appreciation for tandem, tow, and hill training before sending a student aloft solo for their first time.

To become a Tandem pilot you must be an experienced PPG pilot, become an instructor, then go for the tandem rating. You can be an instructor only on wheels as long as the exemption is renewed. It’s only fair to your prospective students passengers to meet such a requirement. The USPPA doesn’t charge anything and, in fact, (as of May 2018) will pay YOU $100 to become tandem rated under its program. As of 2019 membership is $34 per year so clearly it’s not something the org is trying to make money from.