When a non-flying mishap put Brandon Oberlin‘s feet out of commission, he needed temporary wheels but didn’t want to spend a lot of money. He didn’t.

He also didn’t want to take the wheels with him so he would only use the wheels for launch. Presumably he just slid in on his feet for landing. Clever, cheap, functional. 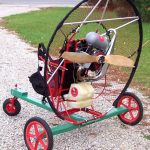 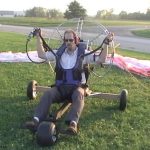 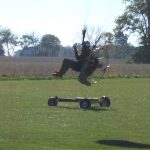 Leaving the wheels behind by design

2007 Nov 27 Terry Lutke had a similar idea although his never intended be jettisoned. It’s shown above.

There are quite a few design elements to designing a good wheeled machine. They include wheel spacing/positioning, hook-in position/height, center of gravity, and motor positioning. Plus, its beneficial for wing pull to steer the trike somewhat without pilot input.

We strongly recommend against new pilots designing their own unless it’s modeled closely on an existing unit. Like paramotors, sometimes minute changes can cause nasty results.