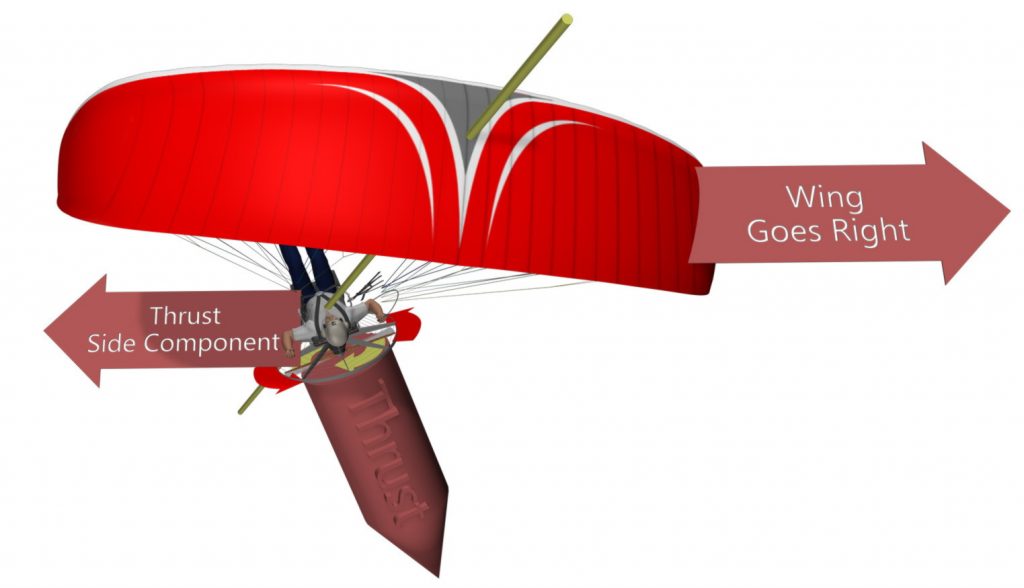 This is one of the most confusing aspects of paramotor dynamics.

Here are the basics: Various torque effects conspire to twist your body left (belt drive), redirecting thrust that now pushes your body left, which causes the wing to bank right like in the illustration above. So although you’re body is being twisted left you’re going into a right bank. That’s why right banks are easier on belt drive machines. But people get confused by the fact that their body is twisting (yawing) left.

Master PPG 2 has a great animation on all the factors that go into making torque effects so dangerous and how to counter them.

Torque and its related minions have contributed to numerous crashes. The pilot starts twisting under the risers, usually to the left which pushes him left and decreases forward thrust. The wing goes right in an unwanted right turn. At this point, the pilot is confused—he’s pointed left, the wing is right, he’s slowing down and not climbing. The lack of climb makes him stay on the throttle—exactly the wrong reaction. In extreme cases, the pilot pulls so much left brake to stop the turn that he spins the wing. That never goes well.

Why? There are two powerful forces and some nearly irrelevant ones. It’s helpful to know what they are but quite important to 1) recognize when it’s happening 2) react accordingly, and 3) set up your machine to minimize the effect.

We’ll assume your prop spins counter-clockwise as viewed from the rear like nearly all belt drive machines. 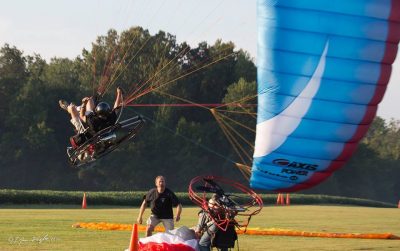 Machine with poorly managed torque aggravated by launching with the wing off to one side at liftoff. Photo by Jason Wright

Torque is what happens when you spin a prop in the air. The engine/pilot tries to spin opposite. Just like when drilling into a chunk of wood and your hand wants to twist opposite the drill bit. In this analogy, the wood is air, the drill bit is your prop and the drill is you.

Note that the closer the ropes (risers) are together, the less force it takes to twist.

The PPG Bible covers this topic thoroughly but here’s a summary. Torque acts in two planes, around the vertical axis (but only if the motor is tilted back) and around the propeller axis.

Now hang from bungee chords with the propeller plane vertical. Throttle up. It wants to tilt you right. That’s the riser shift or weight shift component of torque (WSCoT). HCoT is twisting your body left while WSCoT is tilting you right. Both are causing a right turn, though.

The real villain of twist is that thrust gets redirected, causing a bank and not propelling forward any more. Otherwise the wing wouldn’t really care all that much.

Here are the forces that matter in order of importance.

1. A potentially powerful twisting force for most pilots is the Horizontal Component of Torque (HCoT). It affects machines that are tilted back and can be reduced by making them more upright. On low hook-in machines, move the hang points aft. On others, make whatever adjustments are necessary to get the prop plane more vertical.

If the thrust line is too far off, you’ll twist wildly. Solve it by making sure that, even at full power, your thrust line stays centered.

The above forces account for nearly all torque related accidents, usually in combination with a harness/motor setup that doesn’t resist the twist.

3. Weight shift component of torque (WSCoT) has limited effect based on how much riser shift happens (one riser goes up while the other goes down). Climb up and do a maximum weight shift without brake input. How much turn do you get? On everything I’ve flown it’s still easy to counter with brakes. This is the direct result of spinning a prop in air.

4. Gyroscopic Precession is barely relevant, mostly because it’s so fleeting. Gyroscopic action will make you twist left as you tilt back. It only happens during the tilting. So as the wing lifts and tilts you back (if your motor is normally tilted back in flight), it will cause a brief twist to the left. But once you’re leaned back, the effect goes completely away.

5. Loaded Riser Twist happens if you takeoff with the wing off to one side. It will twist you opposite to where the wing is. For example, If the wing is right while running/rolling, there’s more load on the left riser just before liftoff and you’ll twist left. On belt-driven machines that will aggravate existing twisting forces and can easily be enough to cause a riser twist on a machine that you’ve never had a problem with. I’ve experienced this once when I was TRYING to takeoff in a right bank on a higher power left-twisting (belted) machine.

5. P-Factor, or Asymmetric Blade Thrust is irrelevant. Not only is the force small for our craft, but it’s actually trying to counter the other forces that cause problems. It’s sometimes used as an explanation by airplane pilots who don’t appreciate the nuanced differences of our strange craft.

The descending propeller blade has greater relative wind which gives it more pull. On planes with high horsepower and at high angles of attack it’s a bigger deal. Imagine the prop disk angled not just 10 or 20° but 90° like a helicopter main rotor. You can easily imagine how the into-the-wind blade gets more lift. This is the same reason why helicopters want to bank more as they speed up without pilot input.

Its sometimes used by geared redrive users who claim that torque is countered by having the motor’s rotating mass run opposite to the prop’s—a partially true statement that’s mostly nonsense because the effect is so fleeting and so small. The prop has far more rotational inertia than the motor’s spinning parts so the pilot still feels a twisting during prop acceleration.

What If I Fell Myself Starting To Twist?

Serious crashes have happened as a direct result of twisting. A few have been cause by incorrectly setup machines and others by multiple converging factors but all have a solution that if acted on soon enough solves the problem: throttle back!