I’ve had this problem many times, even on brand new carbs. You blow in the tank vent tube while pressing the needle release (for priming), and fuel doesn’t flow. What the suck? Finally, after talking with guru Lance Marczak about another issue, I had an idea.

During normal operation, fuel is pumped through a fuel inlet needle that is spring-loaded shut. It opens on every engine pulse. And it opens if you stick something in it to release the needle for priming. That’s why Miniplane adds their primer helper on the carb, so you can just push on the tab while blowing in the fuel tank’s vent tube.

If none of this makes sense, you’re probably not flying a paramotor with Walbro WG8 carburetors. The gist is that to prime these machines, you can blow into the gas tank’s vent tube, which pushes fuel up into the carb. But if that fuel inlet needle stays seated, the fuel can’t go anywhere. Thus the needle release mounted on the carb. If you’ve heard of “pop-off pressure” that refers to how much pressure it takes to pop the needle (which has a tiny rubber point) off its seat.

What if you push on the release and fuel still doesn’t flow? You can’t prime and the motor will be VERY difficult to start cold.

There are two solutions, but first a test. Connect a clean fuel hose to the carb’s fuel nipple and try to blow into it. While holding air pressure, push the release. Air should obviously flow easier, something you can hear, and feel. If it doesn’t you’ve got bigger problems.

Probably the best solution is to use something other than the built-in primer helper, like a longer stick to put in the diaphragm hole. Or better yet file off the edges of the primer helper in a way that lets it push in farther. It won’t damage anything because the edges prevent poking in too far.

But there’s another way, a worse way, a way that will also make the engine run slightly richer–it’s not ideal. I’ll get in trouble for mentioning this because you’re changing the feed profile of the carburetor (you know, at x rpm and y throttle setting it feeds z amount of fuel). File away this feed profile bit, and never tell anybody where you read it.

It’s a “scuffed” solution as they say in Serbia.

The trick to slightly — SLIGHTLY — bend up the needle release as shown below. Carefully take the diaphragm off using a screwdriver to oh-so-slightly bend it above level by a tiny amount (less than a mm). 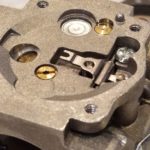 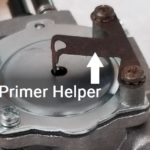 Before putting on a new carburetor that uses the add-on primer helper, do the blow test as described above. I’ve found several brand new carbs where, if I put the primer helper on, pressing it doesn’t release the needle. Fix that.