The reality is that going into the water, even shallow water, without automatic flotation has proven to be a terrible bet. Humans are called land mammals for good reason.

The problem is that it can go from seemingly benign to drowning in a minute or less. One pilot got out of his motor then drowned while swimming to shore, a mere 50 feet away. Another pilot was held underwater by his rig. He struggled to exhaustion then passed out.

What Happens When You Go In

If you’re flying low, have a motor failure and go in the water, things are bad. Even rehearsing on dry land is dramatically different from ending up face down, unable to breath and trying to think clearly. The military understands this intrinsically which is why they make their aviators actually go for a dunking after doing training.

Even a skilled stud of a pilot stands a high chance of panic. Ace flyers who think coolly in air emergencies have acted completely inappropriately when faced with the unique trauma of submersion. Even pilots who have behaved exquisitely under fire have succumbï¿½being suddenly unable to breath breeds it’s own unique panic.

How Can I Survive A Water Landing

So you’ve accepted the risk of overwater flight and now face a ditching. Without floatation, there’s a good chance you won’t survive, as mentioned, but here are ways to improve your odds slightly. If you go in without warning (flying low) then you’re probably screwedï¿½sorry. Doing foot drags in the water has caused a number of pilots to dunk when water slowed the prop or somehow killed the motor. These tips come from actual experience of numerous ditchings, include those who didn’t make it.

If you have some altitude when the motor quits and know you’re landing in water then: 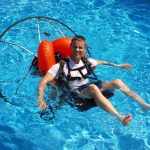 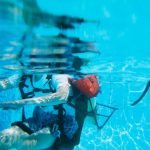 Can I Fly Over Water Safely?

Yes, if the water is less than 12 inches deep or if you have automatic flotation. Otherwise, no. If you do so anyway:

1. Have buoyancy mounted on your paramotor. The Agama (see Agama Test) is ideal but any floatation that can keep the top part of your frame (and mouth) above water will work. It probably needs 100 pounds of buoyancy (the Agama has 400) to keep your head high enough. It’s not good enough just to float you, it must keep you upright and not hold you in a face-down condition. Buoyancy is  determined by how much water weight is displaced.

2. Wear a personal always-inflated life vest like a water skier. You must have floatation in order swim away from the motor safely after a dunking.

3. Have a boat handy or have people on shore with floatation! Swimmers without floatation run a huge risk of drowning themselves. Lifeguards carry those swimming assisters for a very good reason.

4. Avoid moving water like the plague. At least one pilot drowned after he landed next to a culvert while his wing feel in the moving water . It pulled him into the water and he drowned. Water’s pull on a wing is extreme and you will not likely escape once the dragging starts.

Never go beyond gliding distance of shore, avoid moving water, and treat water deeper than 12 inches like the Mariana Trench. The 12 inch max allows your arms to push your head up in case you’re forced into a face down position and can’t roll over due to the cage. One pilot almost drowned in 18 inches of watery muck in just this situation.