When Courts & Judges Get it Wrong

Tim Kaiser flying just south of Lake Pleasant north of Phoenix, AZ. At this altitude, cruise power would make it hard for anyone on the ground to even know we were there if they didn’t look up.

Taylor, a PHX police officer who is represented himself in the trial, is rightfully appealing, and we’ll try to keep up with the case here. Even if he was flying low, this would represent a TERRIBLE precedent on at least two levels. 1) that other law-enforcement agencies can grossly exceed their authority with impunity and 2) our court system is WAY less reliable than we thought. Below is how we know that’s the case.

Yes, we pilots should minimize our noise footprint in sensitive areas; we fly at the pleasure of the people—piss enough of them off and we won’t fly anymore. But we must challenge our government when they go too far, especially the application of illegal laws, which could ensnare even the most conscientious pilots.

As an aside, a similar thing happened to another pilot, Josh Stanaland, over the same park a month later (Oct 2020). Here’s that story and its progress. 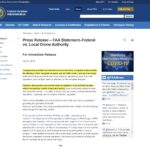 ONLY The FAA Regulates Airspace

We’ve covered this question here, but an FAA press release sure makes it clear: congress has granted the FAA exclusive authority over airspace. It continues: “State and local governments are not permitted to regulate any type of aircraft operations, such as flight paths or altitudes, or the navigable airspace.” Search “Congress has provided the FAA with exclusive” if the link doesn’t work. It was prompted by local authorities trying to regulate drone flying beyond their launch and landing.

The Maricopa judge actually quoted FAR 103 where it addresses that a controlling agency is required. This is the part where if you want to fly in a control tower’s D airspace you call the control tower. Or if you want to fly in a C airspace you call the approach control. It’s what every airplane pilot out there knows but this judge allowed that to become the county! Wow. Just wow. The detail is defined in Federal Aviation Regulation 14 CFR 73.17 Controlling Agency.

We don’t have a flight track but do have two written accounts from legal documents provided by Taylor which are part of the public record.

On April 13, 2020 at about 9:07 AM Monday morning I was standing in a field with another pilot. We both flew that day. We both had been operating a paramotor which is a powered parachute. Sheriffs deputy Castro arrived and cited me in lieu of detention for flying within the county park. He said it was “a violation of a county park rule, and a federal rule by being too low in the park, no motorized aircraft is allowed below 2000 feet in the park.” On the body cam video while Castro was in his patrol he can be heard talking on the phone saying “The park rule doesn’t have the height limit.” As a result I’m currently charged with R-116 Operating any passenger carrying aircraft of any nature or parachute, including parasailing, except in areas designated for such use by the Department or in an emergency situation, a Class 2 Misdemeanor.

Footflyer Comments: The term Powered Parachute (PPC) describes a Category Rating and type of Light Sport Aircraft (LSA). It does not apply to us—we are ultralights. PPC pilots must follow part 91, an ultralight does not, we follow ONLY FAR 103. As it happens, if he WERE a powered parachute, the pilot later correctly points out that he would be exempted from 91.119’s minimum altitudes, including the 500′ rule, which prohibits airplanes from getting within 500′ from of any person or man-made object. He likely included this in case the judge applied that rule, even though it doesn’t apply.

Maricopa county probably gets the 2000′ value from a statement on sectional charts (and elsewhere) that pilots are REQUESTED to stay at least 2000′ above anything within 2000′ of their flight path. The statement applies to flight within the blue dotted lines as shown in the Lake Pleasant extract from the Phoenix Terminal Area Chart.

Yes, the pilot would have likely avoided all this had he complied with that request, but he did not violate a law. And that’s not what they’re charging him with! They’re charging him with violating their county law R-116, saying (if I understand this correctly) that they—Maricopa County—are the controlling agency for this particular “restricted” airspace. It’s a nearly comical mis-read of FAR 103.119 about prohibited or restricted airspace which only the FAA can establish. FAR 103.119 refers, of course, to charted prohibited or restricted airspace or temporary flight restrictions.

The reason this pilot will win on appeal, if he does so, is that the the county law R-116 is an attempt to regulate airspace which they cannot do. ALL such attempts have failed on appeal, as they must. The FAA “owns” the airspace in that they are the only entity charged by congress to do so. The FAA has made this particularly clear now because of drones.

As I was entering the park through Bypass Road near Slate Route 7 4, I was contacted by Maricopa County Park employee Dave Jordon. Dave told me he there was an ultralight flying around the dam and surrounding areas. He said he couldn’t see him anymore and wasn’t sure where he went. As I turned around, I noticed an ultralight with a red/orange parachute flying JUSt east of Bypass Road above the Beardsley trail. I asked Dave if that was the ultralight he was talking about and he said it was.

I went back out onto SR7 4 just east of Bypass Road and watched the ultralight to see where it was going. The ultralight then turned back towards the dam. It was flying around the south side of the dam low enough that it was below the top portion of the dam. It then flew back up and towards the Beardsley trail again. It made several turns and dropped down very low just above the tree line in the river bottom that is between Lake Pleasant Road and Bypass Road. The ultralight then headed out of the park boundaries and headed southwest. I lost sight of the ultralight when it dropped down behind the mountain tops on the south side of SR74.

I drove around for several minutes in attempt to locate the ultralight. I was unable to locate it in the area at that time. Due to not being able to locate it, I started lo head towards Lake Pleasant Parkway and State Route 303. This area is a common place where ultralights take off and land. Prior to arriving to the Lake Pleasant Park, I remembered there were a few vehicles parked in that area when I drove past approximately 20 minutes prior.

As I was getting closer to the Central Arizona Project canal (CAP), I noticed an ultralight matching the same description as the one I saw flying over the lake area. The ultralight appeared to be landing. As I approached the area, I observed two vehicles parked in the dirt just southwest of Lake Pleasant Parkway and the CAP.

I approached the vehicles and noticed there were two males standing by them. As I exited my vehicle, I was greeted by one of the males. As we were talking I asked him about the ultralights and how they got strapped in. He advised me his ultralight has a 4 wheeled system that he gets into. He explained it to me as a quad like system. I immediately knew he was not the person flying over the park due lo the ultralight I witnessed did not have any wheels on it. The male pointed to the other ultralight and said that was straps lo your back and then when you are flying you can sit down in it. At that time, the other male walked over and started talking to me. He was later identified as Taylor Siljander DOB: 06/12/1986. I asked Taylor if he was just flying near the Lake Pleasant Regional Park. Taylor said he was and then asked, “Why, am I in trouble?” I advised Taylor that it was against park rules to be flying over any part of Lake Pleasant Regional
Park. I advised him that no aircraft is aloud below 2000 feet within the park boundaries. The other male then slated, “Wow, that’s as high as the clouds.”

For reference, the clouds were above the highest mountain rage surrounding Lake Pleasant.

Due lo Taylor admitting to flying the ultralight and being well below 2000 feet, he was issued a citation for Maricopa County Park Rule R-116. 1 Parachuting, parasailing, or operating aircraft within the park. He signed and received a copy of the citation along with the Maricopa County Justice Court Arraignment paperwork. He was released with a promise to appear in court.

I went back to the Lake Pleasant Regional Park and I went to the south side of the dam where Maricopa County Parks have an office and an equipment yard. I contacted park employee Kyle Randall and asked him if he was in the area when the ultralight was flying around. Kyle said he was and watched him fly around for a while. When I asked him how low the ultralight was flying, he pointed lo a set of powerlines and said he flew below them several times. He also said there was Camp Host walking up the roadway and the ultralight was flying down in a spiral pattern just above them. Kyle said it appeared he was showing off. Kyle didn’t have any other information to provide.

Footflyer Comments: First and foremost he was flying over the park. In federally regulated G airspace. You’ll encounter the FAA terms “controlled” and “uncontrolled” airspace. These refer to whether air traffic services are provided to instrument pilots. G airspace is uncontrolled, not unregulated. As long as the pilot did not touch down in the park, he was in federal jurisdiction.

This is the single most germaine aspect to Taylor’s case.

I’m not condoning going down low and “tearing it up” — but there is no distinction made between flying quietly up high or tearing it up. They’ve randomly decided that doing something “in” the park qualifies as doing something “above” the park. I’ve flown the lake probably twice and could have just as easily gotten this ticket even though we were up higher. A LOT of us have. This law has NOTHING TO DO with the blue dotted lines. He was accused of violating a COUNTY PARK rule. In federally regulated airspace.

Had they cited a noise ordinance, or proximity-to-people ordinance, or disturbing wildlife, this would be different. They didn’t. They applied an illegal law.

When a court is willing to mis-apply the law that vagrantly there is no choice but to appeal. It feels like the court is taking this personally and tossing objectivity. Either that or they’re remarkably incompetent.